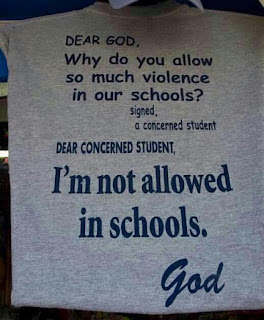 Every time a tragedy happens I hope and hope the religious will refrain from saying something mind-numbingly stupid.  I have had to learn to live with disappointment.

Within hours of a school shooting, talking heads are on TV and the faithful are on Facebook declaring that we should expect nothing else - because we have kicked God out of our schools.

It seems god is impotent.  Like a vampire, he cannot enter a residence unless he has been invited.

To be fair, there are plenty of religious folks who flee such theology like said vampire from a crucifix. Throughout most of my time as a Christian (I can't say all), I loudly condemned such a horrid view of the Divine.

Still, it is a thoughtless position that the thoughtless like to proclaim.  Such logic did not hold when an Amish school also experienced this horror.  The view they present of their deity is one that no decent person would want any part of. 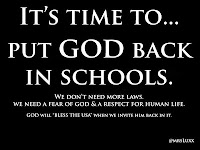 I often, as a teacher, have to remind some of my friends and family that no deity has been kicked out of our schools. Their deity has simply lost preferred status.... and to them, equality seems awfully unfair. They want dominance; or they will cry persecution.

As a teacher, I am to remain neutral. I consider it a good thing if, at the end of the year, my students have no idea what my particular religious proclivities are.

Wow, I just spent a whole afternoon reading many of your blog posts. I de converted a few years ago and can very much relate to the process you have described.

And yes, this particular facebook post has had me shaking my head. Oh logic - why have you forsaken us!

Thanks for reading Jonni! It has been interesting, and disheartening, to read the various defenses of Mike Huckabee and such Facebook posts. I keep finding that I maintain a delusion - that such positions are held in ignorance - that if a thoughtful explanation is given, the "Mike Huckabees" of Christianity will see. However, I find again and again it is not so... there is something nefarious going on in a person who WANTS to maintain a belief that their god is being actively rejected.

Ran across your site today, and amen, amen, amen. I posted that first photo on my FB(from Matthew Paul Turner's FB) with the caption "a very ugly and sad theology." I'm pretty sure the first few people who liked it didn't see my caption, and I was abhorred that someone might actually think I agree with it. It's like we tell God "you can't come in here!" and God says, "Well okay, you crafty humans!"

Heh... I have had that experience with posting some items - my intention was to show contempt, but the readers failed to capture my sarcasm or irony (which, admittedly is harder to catch sometimes without the benefit of tone and facial expressions).

I think many Christians (not all) in America are experiencing what monopolistic companies experience when their monopolies are broken up. Deep down many know the product they are pushing won't compete well in an open market...so they try to muscle out the competition.

As for me, I have complete confidence in "my product"...probably why I don't freak out...

Thanks for your post. As a liberal Christian, I am sickened by comments from "evangelicals" and pundits like Huckabee and his vengeful view of God. These people have soured me on many aspects of Christianity, and are partly to blame for why I no longer attend church. And yet, deep down, I am a believer, and I keep looking for the light. Thanks for letting it shine on common sense.