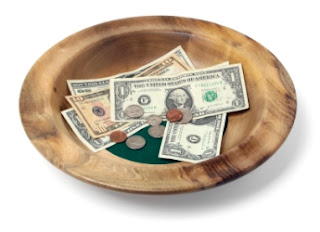 Tithing is a hard thing for churches to bring up. First, because people generally abhor discussing their personal finances and because the church has not always been able to keep its hands clean while handling money. As Winkey Pratney puts it "Most churches fail the test when it comes to being impressed with money". Pratney proposes that since God is not impressed by money, his children should not be either.

I believe tithing is an unbiblical topic that churches try to slide into our ethos because it is convenient. I don't say beneficial, because that would imply that there is a nefarious motive and, except for televangelists, I don't think that is usually the case.

So what is a tithe and where do we get the idea? Simply put, it is the notion that 10% of one's income should be given to God in some way. Some churches teach that it is a general number to be given charitably overall, while others teach it should be given directly to the church (anything you give outside of the church should be a gift above your tithe).

In the old testament, tithing was the way given for supporting the priesthood, the holy places, and the poor. At the time, there was no king so the priesthood served many of the functions of a government. Most notably, it was their responsibility to care for the poor (Churches have mostly abdicated this responsibility to the government... yet they still want a full tithe). In addition, tithe usually didn't refer to income... it was crops (to feed the priests and the poor). A person didn't sell his crops and then tithe the money, he just gave a portion of his crops. So is a person contributing his talents still tithing?

How does tithing apply to the New Testament? I would submit that it does not.

Second, tithing was to maintain the priesthood. Who is the priesthood now? Peter says that all believers are now priests before God with One mediator. The veil has been torn in two and the temple now resides within the believer. There is no longer a specific priesthood to maintain.

So what is the pattern for giving for the church? There are principals given, but I think the apostles were intentional when they gave no number.

The ideal was set in the beginning of Acts where no believer considered anything his own and gave to everyone as he had need.

Whew! Anybody ready to rev up to that one?

However, you do not find Paul repeating that ideal as he established churches. What he did indicate was that:
It is that last point that I believe tithing runs contrary to. Paul said, "Each man should give what he has decided in his heart to give, not reluctantly or under compulsion, for God loves a cheerful giver". How can a person decide in their heart to give a certain amount if their church has already proclaimed that amount? If tithing were to be for the church, then Paul is contradicting this. In addition, proclaiming that people are obligated to give 10% is defacto compulsion. You cannot dictate an Old Testament tithe without running contrary to this scripture.

So why do churches encourage their members to tithe?
So what is the alternative? If churches want to ask for 10 percent because that is truly what they feel they need, fine... just don't try to bring God in as muscle. Remember "decide in your heart...not under compulsion".
Second, I have always wondered why churches don't spend a Sunday as a body looking at the budget. What if the finance guy got up and said, "Here is what we spend on this, this, and this. Here is what it takes to presently run our church. If we want to add this or this, we would need to increase our budget. So, based on that, we would need everyone making roughly this much to contribute this amount to maintain and this amount to grow." Give everyone an idea of how much they would need to contribute "in keeping with his income" to maintain and/or to grow.

Paul said to contribute "in keeping with [your] income". He wanted people behaving responsibly. Should a single person living alone making 50 thousand and a family of 6 making 50 thousand be held to the same standard of monetary giving? Where does Paul state that any church is given authority to hold anyone to a financial standard?

In conclusion, I believe even a cursory study of scripture works against the modern church view of a tithe. I know tithing is mentioned in scipture, but I feel modern churches pull it out of its context. There are dozens of Old Testament vows, behaviors, and callings that would be out of place to put on a Christian. Why do we grab tithing while stepping over so many others? Our overall unquestioning acceptance points to a bigger issue in our churches... scriptural illiteracy.

My Pastor did a really worthy message on our slavery to money and status. To hear it, click here.

One of the ways to break the cycle of endless affluence is to make sure we do not pass our dysfunction on to our children. In that spirit, click here to sponsor a rich child.

I support Bart and Tony Campolo!

To be honest, it has also become too negative. Evangelicals are often associated with being obnoxious and unkind. As I look at the attitudes and rhetoric of many Evangelicals, I am struck by how much they resemble the Pharisees of the Gospels.

For example, Tony Campolo recently had kind and hopeful things to say regarding prostitutes and homosexuals. This made a lot of Evangelicals uncomfortable. Here is a response from one of the naysayers:

"What does [Campolo] mean by referring to prostitutes and homosexuals as "precious children of God"? The bible calls people who love worldliness and reject Him his enemies (John 3:18, James 4:4), they are children of wrath (Eph. 2:1-3). Also it says in Psalm 7:11 that God is angry with the wicked everyday. The bible also says that those who practice these things will not inherit the kingdom of heaven (Eph. 5:3-6). These are hard truths found in scripture. I find no pleasure in this. I guess I just do not understand what Campolo means here."

The thing is, technically, the Pharisees were not wrong; but they had a horrible attitude about people. Jesus was willing to put the rules on hold for the sake of people. The gentleman I quoted above would have been the first to pick up a stone and throw it at the prostitute. Did Jesus consider prostitutes his enemy? Did prostitutes consider Jesus an enemy?

I have been following the reactions of Evangelicals about Bart Campolo's article "The Limits of God's Grace". I loved the article, but there are MANY who hate it. They call Bart a heretic, an idolater... and then they get nasty. Personally, Bart has become my spiritual hero. (Click here for a great message by him)

Heh! Keep it up boys! You Rock!