Which Jesus Do You See? 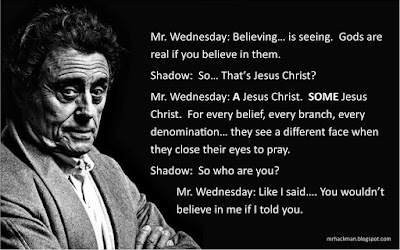 I was watching my brothers have a conversation about the nature of Jesus on Facebook the other day. It became clear to me at that moment that they do not worship the same god. Their gods share a name, but the similarity pretty much ends there. They, as Mr. Wednesday put it, "see a different face when they close their eyes to pray".

I had previously accepted the explanation for these different takes on Jesus to be a matter of perspective. People can see the same movie and come away with different views of it. However, the more I become aware of the different sects of Christianity, I realize their takes on Jesus are truly different personalities. Much like James McAvoy in the movie Split, there may be one vessel but the personalities are distinct.

It makes me wonder if this is the real reason for the growth of Christianity in history. It certainly cannot be what Christians say about Jesus... because they say completely contradictory things. Rather, it was the franchizing of the name to anybody and everybody.

It is like when you go into a town and find a Pizza Hut that also serves Taco Bell. Their brands couldn't make it locally on their own... so they got together under the same roof. Similarly, I wonder if all the brands of Jesus would make it independently if they could not share the name? What would happen if they got to keep their view of Jesus, their history of Jesus, their teachings about Jesus... but they had to give him a different name. What if Jerry Fallwell's Jesus took the name Anton and the Pope's Jesus took Alan? Rob Bell's Jesus could be Brian? The United Methodists take Stan. The televangelists get to name their's Lou.

All of these folks have decidedly different gods. Most of them consider the others partially or completely invalid. Give their varied views flesh and blood and you would never mistake them for the same person.

So why do we call them by the same name?