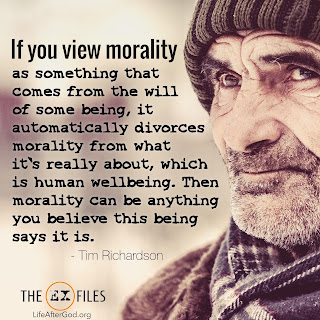 One of the questions I often get as an Atheist is, if I don't have a deity that I worship, where do I get my morality? I contend that receiving a moral code from an authority is always going to be problematic.

People who receive their morality will always be living with contradictions - what they have been told and what they have experienced. In addition, if people have a deity and a holy text like the one I had, they are going to struggle with their authority being inconsistent.

I find that non-belief gives me a much clearer playing field and encourages me to engage my ethical code in ways that I did not when I was a believer.  When I was a theist, I was concerned with whether or not I was obedient.  Now I am concerned with how much help or harm I bring to my world.