Facebook Faith #53: You Have Your Truth, I Have Mine 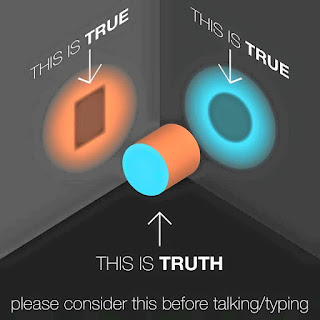 I have seen this posted no less than a dozen times in the past week. I agree with it on most levels, but I also see a dark side to its use.

Growing up, my faith was the one true faith. Anyone not of our faith was to be regarded as a potential convert or the enemy. Folks were out to infect THE truth and we had to guard ourselves against them. This was an easy position for leaders to promote as information for an opposing view was not readily available and fairly easy to block.

Nowadays, information is readily available and in many ways unstoppable. With these new circumstances, faith groups seem to be making a pivot in practice.  They have changed the rhetoric, while still maintaining the goal of keeping out, or at least neutering, opposing views. Now believers say, "They have their truth, we have ours." By doing so, they no longer have to deny the existence of alternative world view voices. The view can be acknowledged, but does not need to be addressed.

This is a more passive position than previous practice... but it still lets believers and their leaders continue to mantra their position as TRUE, while avoiding having to compare those claims against anything other than their own statements.