A friend of mine wrote a book about why he is a Latter Day Saint ("Mormon" for all you folks outside of UT who have no idea what that means). It is a well written presentation of his reasons for converting to the Mormon faith from being an evangelical.

I could sit here and list my technical disagreements, but yesterday when listening to the radio, I heard something said that makes all my other objections inconsequential and really gets down to why I feel Mormonism and most isms spend a lot of time missing the point.

I was listening to Bob Lonsberry (whom I enjoy) on the way to church and he was discussing Mormon missionary practices and the text they use. He asked himself the question, "How does a missionary go about reaching someone who has no Christian background? What is the starting point for someone who has no Christian history or experience?" He answered, “You tell the story of the prophet Joseph Smith and the restoration".

There it was, the true crux of my objection.

Bob should have answered, "You tell them about Jesus! Jesus loves them! Jesus can redeem them from their sin! JESUS!"

Bob is not alone in this behavior. Many Christian churches elevate a person or a doctrine above Christ in some format or other. In any case, if the church isn't doing it the individuals often are.

I grew up in charismatic circles and they talked about faith, healings, and material gain a lot. Not so much about Christ. When Christ was talked about, he was usually mentioned as a means to an end... not the end itself.

Mother Teresa said, "The prize with which God rewards our self abandonment is Himself".

But we as a people seem to have a habit of choosing the lesser thing rather than the greater. The Israelites had just been delivered from Egypt, and they made themselves a gold cow to worship. When God revealed himself on Sinai, the Israelites begged Moses to go talk to God in their place.

There was a Christian Rock artist I used to go see whenever he was in town back in the 80's and early 90's. I used to love the fact that he would preach most of his concert. Regardless of where you were spiritually, he could hit you right between the eyes because he loved to talk about Jesus.

He left music eventually and it had been years since I had heard from him. Then by chance, I found he was going to be preaching at a local church. I couldn't wait. When I listened to him that Sunday my heart sank. He didn't talk about Jesus anymore. He talked about his pet doctrines and poked fun at people who didn't buy into those doctrines.

I love the way CS Lewis presents the supremacy of Christ and his light in The Great Divorce. Next to his light, everything else is mere shadow.

I believe many isms serve as tutors. In fact, I think God often calls people to spend a considerable amount of time in an ism... sometimes a lifetime. But the ism isn't Christ and it is a dreadful mistake to become so bound in it that you miss HIM.

Hebrews 1:1 says, "In the past, God spoke to our forefathers through the prophets, at many times and in various ways. But in these last days, He has spoken to us by his Son!"

He has spoken! He is wonderful! He forgives! He renews! He equips! He is All!

If we bear his name, I think everything else should leave us kind of cold. 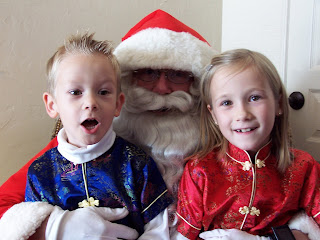 I always knew the day would come. Another milestone has passed in my daughter's life.

People debate when to tell their kids about Santa Claus. I knew the time would present itself, and today was the day. This time when she asked, I didn't evade. I told her it was time to see behind the wrappings of the gift her mother and I had given her.

And I do believe it is a gift a parent can give to their child. There are few years when the veil between imagination and reality is so thin. Santa, reindeer, elves.... I think there is a singular opportunity for blissful joy which can rarely be captured outside of a wonderful fairy tale during those early years.

A love for Santa is a love of poetry, music, daydreams. It is warm cocoa and a blazing fire. It is snuggling under the covers to keep warm on a cold morning.

I told Kathryn her mother and I had given those stories to her during those years as a gift for her to enjoy. Now it is a gift we want to give to Jacob as well. Children are so excited to know things and they have a desire to let others know that they know. I encouraged Kathryn to not take that gift from anyone.

I loved watching the thrill on Kathryn's face when she and Jacob spoke to Santa at the North Pole over a webcam this year. I am grateful for the memories of my brother Matt dressing up as Santa for her and giving her a special Christmas Eve.

I believe in Santa Claus. I know someday when Kathryn has little ones beneath her Christmas tree, she will believe in him again too.