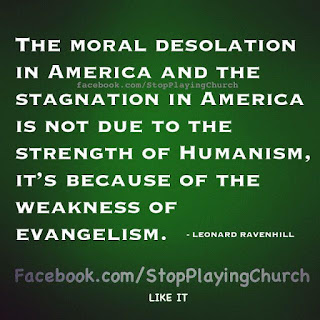 I grew up in a Christian culture that valued the preaching of Leonard Ravenhill and men like him - so I have to comment on this poster I saw on Facebook.

Preachers like Ravenhill see the world as a decadent place that is getting worse all the time. The only solution available, from their perspective, is to make you like them. The world they see consists of Christians (who usually are not committed enough), enemies of the faith, and the yet to be converted.

Leonard Ravenhill was born in 1907 and died in 1994. He saw amazing things. Aside from scientific advances, which would cause any person with awareness to whoop with joy, he lived through societal progression that had never been seen in human history. He saw women, children, minorities, and the poor go from being treated as property or second class humans, to becoming people with rights, desires, and freedoms they could rightfully claim. Moral desolation? I call that significant moral progression!

There are still many preachers like Leonard Ravenhill out there. They see Humanism, the desire for humanity to reach its best potential, as a threat to religious control. Religious control needs humanity to see itself as wounded, damaged, and unworthy.

I met Leonard Ravenhill once.  He was busy chastising some female classmates of mine (one to tears) for going out for ice cream together rather than attending his bible study.

I knew then, and believe more so now, that those girls spent their time more wisely by going out for ice cream. 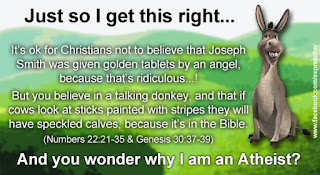 Accepting the reality of this picture was one of the key items that drove me from my faith.  I grew up in evangelical environments where ours was the dominate religious influence.  When I moved out to Salt Lake City 9 years ago, I had quite an education in what it was like to be a religious minority.

One of the things that struck me is that Evangelicals out here often rolled their eyes at Mormonism, incredulous that Mormons could "believe all that crazy stuff". Mormon practices, scriptures, and beliefs were often snickered at by my Evangelical friends.

Since I had developed so many friendships with Mormons, I found myself getting defensive on their behalf. I didn't believe Mormon theology, but I was becoming annoyed at the behavior of my Christian friends towards Mormons. Somewhere in that process of annoyance, the groundwork was laid for me to look at my own practices, scriptures, and beliefs... and, low and behold, I started to wonder why I "believed all this crazy stuff".

Reading Bart Ehrman's Jesus Interrupted, I came across the reason why any of us believe "crazy stuff".  When religious people read their scriptures or partake in practices, they are doing so devotionally - they are dedicated to the truth of the scripture and practice from the beginning.  A devotional approach, as opposed to a critical one, allows one to bypass items that would normally challenge our reason.  What usually happens is Religion A wants Religion B to observe Religion B's practices and scripture critically... while Religion A continues to observe its own practices and scripture devotionally.

My faith began to crumble when I saw the inherent hypocrisy of applying critical thinking assessments to the religion of another, while being unwilling to apply them to my own.  Once I began to look at my faith critically... it didn't last long.

The following is a conversation I had with an Evangelical friend of mine on Facebook concerning belief in God. I don't have these as much anymore since many of my Evangelical friends have defriended me on Facebook, or have merely removed me from their Newsfeed. One friend told me she had defriended me so she did not have to "put up with" my negative views on religion. Facebook, she believed, was not the place for me to be making such arguments. Somehow, she did not consider her constant stream of religious cliches' to be in the same "argument" category. :)

This is also a good conversation because Mike and I are cordial and respectful throughout...

I recognize that these discussions tend to be circular, so one might wonder whether or not they are worth having. I believe they are. Not so much because I think I will have any impact with the person I am in conversation with (as Brook makes clear), but rather with those who may be observing. My exit from Christianity may have happened much sooner had the internet been around when I was young. To be sure, my questions and doubts started early, but I had no one to bounce them off of. There were few avenues for questioning available to me as a young person. I think these conversations are worth having because there are still myriads of people who are unaware that there are other stories being told.