Why Do Atheists Talk About Religion So Much? 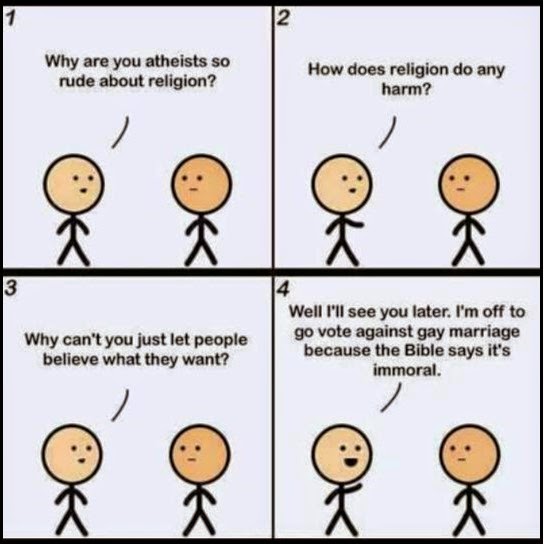 Whenever a conversation starts on Facebook, or some social media site, between atheists and theists, I start a mental countdown.  How many comments before someone chimes in, "Why do atheists talk about religion so much??"  This is usually stated not so much as a question, but as an ejaculation of frustration. WHY CAN'T ATHEISTS LEAVE RELIGION ALONE?

However, for all the angst ridden accusatory interrogations, I suppose at times it may be a genuine question - perplexing the religious folks who have not had much contact with unbelievers. So, for those really needing an Atheism 101 introduction, let me offer my insights - as a fairly new atheist myself.

The primary reason atheists talk about religion is social and political need. As the cartoon demonstrates, religious people make decisions based on religion that affect the non-religious. There is no way to address these ramifications in our daily lives without addressing the root from which they sprang. In a culture where almost everyone is religious, it is simply unavoidable.

Second, most atheists were once believers. As I write, scores of new atheists are leaving the religious life. They are BURSTING with questions, thoughts, and new concepts. In their churches, it was probably the case that all of those questions were stifled. The shackles have been removed, and they want to TALK.

As a believer, I struggled with the concept of Hell. In my evangelical sect, questions about Hell were either shut down, or you got the party line.... but there was no one willing to deconstruct it with me. When an atheist "comes out", they usually have a long list of things they have been dying to talk about - that were not welcome topics of conversation in the church.

Even years later, they are still unpacking.  The Atheist keeps finding thoughts, fears, and prejudices nested deep in their psyche. Moralities that were imparted by their religion now have to be re-evaluated in the light of reason. I had it drilled into me since childhood that behavior X is wrong.  Is it really? Why do I think so? I don't know, I just do. Time for some unpacking.

A third point, I think, is normalization. I want it to be normal for a perspective of "no deities" to be brought up in conversation. Religious people don't tend to notice how privileged their position is. They expect it to be normal that they may go on and on in a conversation about god and churchy things... but feel it unseemly, awkward, or even rude for a position of non-belief to be mentioned. I wish I had a dollar for every time a conversation was laden with presumptuous religious talk, but my mention of atheism was treated as an act of hostility.

Those are my thoughts that I would share with the person asking the question honestly. Honestly though, I am not sure that I have ever really heard the question asked honestly. 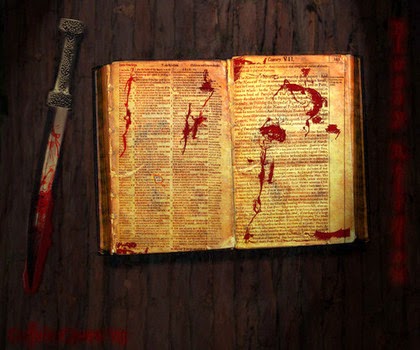 Yesterday, religious extremists killed a dozen people in Paris. These zealots felt they were defending the honor of their religion from, perceived, blasphemers.

So today there is a lot of talk from religion’s defenders and critics. Defenders like Reza Aslan will try to distance what happened in his religion’s name from the “peaceful” religion in which he takes part – anyone who doesn’t see the difference, in his view, simply does not know the meaning of the word nuance.

I understand his argument, and I know the frustration of being lumped in with a group you feel does not represent your view. However, ultimately his argument rings hollow for me because he is defending the indefensible. Religion is violent.

I believe Reza Aslan when he says that he is both peaceful and religious; but I also believe he maintains that position by choosing to select which aspects of his religion he will deem valuable.

The religion I grew up with commanded that women who were found not to be virgins on their wedding night were to be dragged to their father’s door step and stoned there. In fact, we had many offences listed in our holy book which required us to stone people to death. However, we never did it. In fact, most congregants were ignorant that those edicts were even in our holy text. I once spoke with a pastor who was surprised to find out that his church’s belief statements contained a line which condemned everyone not of their faith to Hell. Often, what the believer believes, and what the religion teaches, are two different things.

Holy texts are drenched with blood. They are filled with commands to kill the outsider and the infidel. They encourage rape, slavery, misogyny, and a host of terrors that can never be categorized under the heading of peace. Yet, through generations of self-talk, selective editing, and avoidance, we have made it common to equate religion with peace… and it simply isn’t true.

Humanity, with its bent toward empathy and compassion, is slowly untying the knot and shedding all that is violent and inhumane in these religious texts.

Until the day when we can shed them once and for all.