See You At The Tee Box! 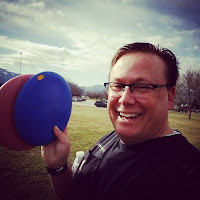 It took until my late 40s, but I finally am into sports. Playing that is, not watching.  Also, it is only one sport.

My love of disc golf, like most things in life, happened by chance. I went with some friends one evening to give disc golf a try.  They had played before, years ago, and wanted to give it another run. I did not imagine that I would particularly enjoy the game, but it was something to do. 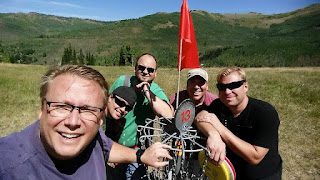 One game led to another game, and another.  I became interested enough to buy my own discs. I watched some videos to improve my throw.

Before I knew it, I was hooked.

As I thought about it, I realized it grabbed me on a few levels:


1. It is a chatty sport - I enjoy conversation and this was a sport that let me do that.  I grew up playing baseball, and baseball was enjoyable, but not very talkative.  Most sports are all about the game itself.  Disc Golf is another way for me to further conversation.  I have played a few rounds solo, but this sport is best when played with friends.


2. It makes me walk - Most of my pleasures in life are pretty sedentary.  Disc Golf gets me moving. A course it typically 2-3 miles of walking, often at varying elevations. 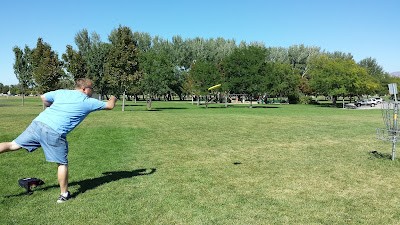 3. It is FREE - Well, mostly free.  I have invested a few hundred dollars in discs and bags, but to go out and play a round only costs you the gas to take you there. 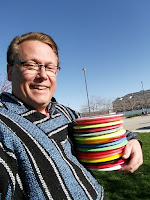 4. Disc collecting - I have a strand of my personality that likes collecting things.  Discs tap into that. Discs have three distinct purposes -  Driver, mid-range, and putter.  A disc will then vary according to a scale on how far it will throw, and where and when it will turn.  There is quality of plastic. They also differ in weight from 130-180 grams.  Then there is color and print.  I presently have around 40 discs... which is probably 25 more than I actually need.

Disc golf is often compared to traditional ball golf, but I actually find it more analogous to miniature golf.  In disc golf, you spend a lot of time going around, under, and over obstacles.  Big, open power drives exist, but probably on less than a third of the baskets.  Some disc golf courses exist entirely within the woods.

By the way, disc golf goes great with beer. 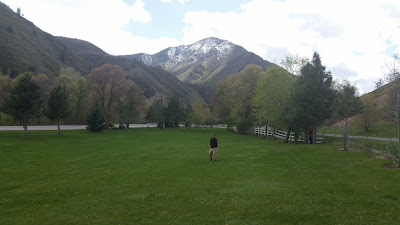 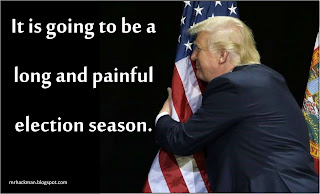 After Donald Trump hugged the American flag yesterday I created this meme.  My brother questioned why people were offended by his hugging the flag.  I replied that, in my case, there is no offense but plenty of recognition of pandering... on a dark comedy level.

There is this great scene in House of Cards where Kevin Spacey's character, a senator, has to say a few words at a funeral because it is politically expedient. The senator has no particular interest in Jesus or religion... but he took the measure of the crowd and when he spoke to them, he LOVED Jesus and the bible and God above....then he left the podium and turned it right back off again. But the crowd loved it.

Donald Trump loves the spotlight. However, in all of his years seeking the public eye, I don't think anyone would have used the word patriotic when describing him. Patriotism has never been a marker of his public persona. There is nothing in his business practices that shows he would put dedication to country over dedication to profit.

But when he stepped up to the podium, he took the measure of the crowd, realized what would get their juices flowing, and he went and hugged a flag. 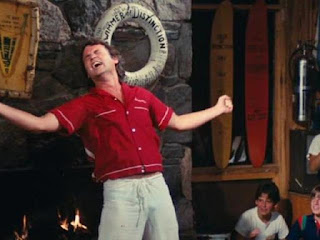 That is why it will be a long and painful election season. We have many more of these episodes to endure.  Last year if he had hugged a flag, I would have been sure that using Old Glory as part of a political stunt would have ruffled the feathers of a fair amount of his audience - but I know better now. I knew yesterday when I saw that picture that it would have no negative effect. It doesn't matter what Donald Trump does, it just doesn't matter.