What would Jesus Buy?


Pray for us sinners Reverend Billy!!!

Reverend Billy and the Church of Stop Shopping I should not have liked Journeyman so much. I have learned over the years that I am a great barometer for the life of a TV show. If I enjoy it, it is doomed. This pattern has held true for Journeyman. This show has been my favorite this Fall. Great writing and a good story arc. The amount of junk that stays in primetime season after season is endless... but a good show never gets a chance to get its legs. Irritating!

You mean you haven't seen this video yet? If not, there is about 6 minutes of nothing in the middle that you can scroll through.

First, let me say that I believe the cop should not have escalated the situation. He was out of line. However, what I want to focus on is the behavior of the citizen.

What I see here is becoming the norm in our society. A kid goes through his/her childhood never hearing the word "No". The parents are not willing to follow through with discipline, so they take the easier route of appeasement. Then the child goes to a school which has been completely emasculated. The child experiences no consequences for their behavior. There are second, third, then exponential chances given. If by chance, a child actually is held accountable for misbehavior, the parent is there to "protect and serve" the child. The message to the majority of modern children is "do what you want, when you want, and how you want". By the time the child becomes an adult, they have no mechanisms for dealing with a situation that does not go their way.

Then we get situations like this video. The citizen is getting angrier and more attitudinal because the authority figure is NOT catering to his wishes. This is something he is not used to and does not know how to respond.

There was confusion by the citizen as to "why" he was being asked to step out of the car, but even here it is because he assumes the cop is going to do things according to HIS prerogative (not the cop's). The citizen believes HE is the one who should be giving instructions.

The depth of the citizen's cluelessness is demonstrated when the cop pulls the tazer. He is so entrenched in the "do what I want, when I want, how I want" mode of thinking that he cannot see or believe what is happening. It runs contrary to everything he had been taught growing up. Following an instruction is something he has trouble conceiving.

The cop was wrong, but he may have saved that man from a life of continued self-absorption.

One last point; this happened in Utah. That cop is probably making 16 bucks an hour. Here in Utah, we have an aversion to paying for quality.

I think these videos are a little simplistic, but very funny. I like the term progressive. I have almost completely rejected, and become rather antagonistic toward, the Republican party. However, I have not found Democratic politicians to be too much better. I think the term progressive speaks to a way of thinking, rather than voting.

I live in the Salt Lake Valley. We are one big bowl. Pollution has a hard time getting out, and often a haze called "inversion" settles in and thickens. Our ultra right republican legislature, in typical conservative form, just shrugs at the inversion... it is a testament to our robust economy. They would never think to address our industries that belch pollution. To them, mass transit is the cry of pinko-leftist-commie-treehuggers. It is the antics of politicians like this, and their talk-show cheerleaders, that are sending so many of us in the other direction. Is it possible for a republican to make the environment a priority?

USAToday had a good article about Emergent.

I was browsing a new blog today that made some very poignant points in short verse. Often stated as If-Then statements, he shows that you can say a lot in a few words. Many had me laughing out loud. This guy should fill in writing Dave's Top Ten during the writers' strike. Here are a few choice examples:

If the Good News is that you and a few others who make the cut will be saved from screaming in hell-fire for billions of years with the rest of us, when were you gonna drop the Bad News on us?

If we want to talk about true goodness, isn't beer a pertinent place to begin the discussion? Beer separates those of us who enjoy God's gift of alcohol from the people who make us want to drink it.

If Christianity is not a performance based religion, why aren't you allowed to get off the treadmill?

If Christ asked His Father to forgive those who crucified Him, aren't they all forgiven completely?

This list is making its way to various blog sites. The talk that Brueggemann gave at the 2004 Emergent Theological conversation is responsible for a marked shift in my theology. If you have heard me talk about my faith in terms of "fidelity" rather than belief, this is where I developed that vocabulary. Listen to the audio here. 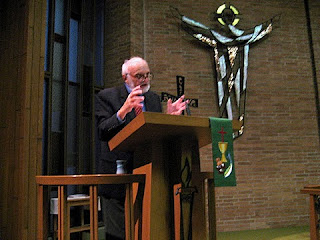 Walter Brueggemann's 19 Theses
1. Everybody lives by a script. The script may be implicit or explicit. It may be recognized or unrecognized, but everybody has a script.

2. We get scripted. All of us get scripted through the process of nurture and formation and socialization, and it happens to us without our knowing it.
3. The dominant scripting in our society is a script of technological, therapeutic, consumer militarism that socializes us all, liberal and conservative.
4. That script (technological, therapeutic, consumer militarism) enacted through advertising and propaganda and ideology, especially on the liturgies of television, promises to make us safe and to make us happy.
5. That script has failed. That script of military consumerism cannot make us safe and it cannot make us happy. We may be the unhappiest society in the world.
6. Health for our society depends upon disengagement from and relinquishment of that script of military consumerism. This is a disengagement and relinquishment that we mostly resist and about which we are profoundly ambiguous.
7. It is the task of ministry to de-script that script among us. That is, too enable persons to relinquish a world that no longer exists and indeed never did exist.
8. The task of descripting, relinquishment and disengagement is accomplished by a steady, patient, intentional articulation of an alternative script that we say can make us happy and make us safe.
9. The alternative script is rooted in the Bible and is enacted through the tradition of the Church. It is an offer of a counter-narrative, counter to the script of technological, therapeutic, consumer militarism.
10. That alternative script has as its most distinctive feature, its key character – the God of the Bible whom we name as Father, Son, and Spirit.
11. That script is not monolithic, one dimensional or seamless. It is ragged and disjunctive and incoherent. Partly it is ragged and disjunctive and incoherent because it has been crafted over time by many committees. But it is also ragged and disjunctive and incoherent because the key character is illusive and irascible in freedom and in sovereignty and in hiddenness, and, I’m embarrassed to say, in violence – [a] huge problem for us.
12. The ragged, disjunctive, and incoherent quality of the counter-script to which we testify cannot be smoothed or made seamless. [I think the writer of Psalm 119 would probably like too try, to make it seamless]. Because when we do that the script gets flattened and domesticated. [This is my polemic against systematic theology]. The script gets flattened and domesticated and it becomes a weak echo of the dominant script of technological, consumer militarism. Whereas the dominant script of technological, consumer militarism is all about certitude, privilege, and entitlement this counter-script is not about certitude, privilege, and entitlement. Thus care must betaken to let this script be what it is, which entails letting God be God’s irascible self.
13. The ragged, disjunctive character of the counter-script to which we testify invites its adherents to quarrel among themselves – liberals and conservatives – in ways that detract from the main claims of the script and so too debilitate the focus of the script.
14. The entry point into the counter-script is baptism. Whereby we say in the old liturgies, “do you renounce the dominant script?”
15. The nurture, formation, and socialization into the counter-script with this illusive, irascible character is the work of ministry. We do that work of nurture, formation, and socialization by the practices of preaching, liturgy, education, social action, spirituality, and neighboring of all kinds.
16. Most of us are ambiguous about the script; those with whom we minister and I dare say, those of us who minister. Most of us are not at the deepest places wanting to choose between the dominant script and the counter-script. Most of us in the deep places are vacillating and mumbling in ambivalence.
17. This ambivalence between scripts is precisely the primary venue for the Spirit. So that ministry is to name and enhance the ambivalence that liberals and conservatives have in common that puts people in crisis and consequently that invokes resistance and hostility.
18. Ministry is to manage that ambivalence that is crucially present among liberals and conservatives in generative faithful ways in order to permit relinquishment of [the] old script and embrace of the new script.
19. The work of ministry is crucial and pivotal and indispensable in our society precisely because there is no one [see if that’s an overstatement]; there is no one except the church and the synagogue to name and evoke the ambivalence and too manage a way through it. I think often; I see the mundane day-to-day stuff ministers have to do and I think, my God, what would happen if you talk all the ministers out. The role of ministry then is as urgent as it is wondrous and difficult.

One of the good and bad things about reading a great blog is that you get tuned in to other great blogs. By reading Coming out of the Prayer Closet, I got tuned into No Mechitza In My World and Losing my Religion. The bad part about this is that my blog reading list is starting to get pretty long. :)

Recently on No Mechitza, the author, Yael, was talking about loopholes. In her Jewish faith, she has found "loopholes" for family and friends who have turned to other faiths. Without these loopholes, she would probably have to think of them as idolaters. She has had evangelical friends who have told her about the loopholes they have come up with to accommodate her beliefs. Some of the other people in the conversation also chimed in with the loopholes they have to accommodate people with a sincere faith that differs from theirs.

I find that I look for loopholes too. I have many Mormon friends who passionately love God - they just work out the details differently than I do. Though many in my Christian circles are convinced that they are Hell-bound, I do not believe this to be true. I have heard many of my Mormon friends make similar accommodations for me.

I believe the desire for loopholes pleases the heart of God. I believe God to be, first and foremost, a Father. Being a father myself, I sometimes try to anticipate his reactions toward me based on what my feelings would be toward my own children.

I believe this makes God smile. Here's to loopholes!