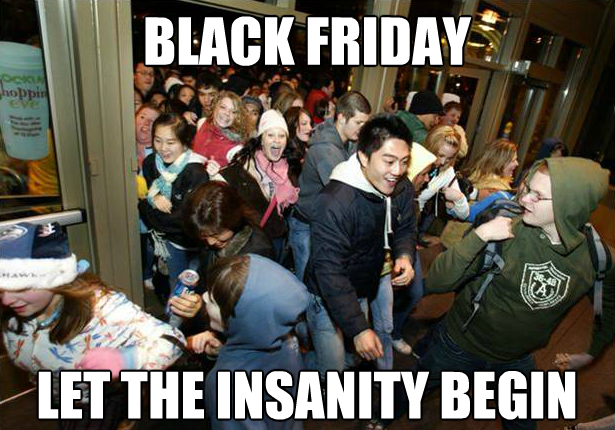 My Black Friday shopping in the past few years has been minimal. Nowadays I try to snag a few deals online (which I have this year) and call it a day.

But years ago, I used to get together with my brother-in-law on Thanksgiving and we would grab the ads and chart out our items for the next day. We would meet up early the next morning with some friends and see what we could get. We would never show up hours before, camping out was not for us, but we would be there when the doors opened. Sometimes we got some deals, and sometimes we didn't.  Then we would all head over to breakfast at Denny's.  It was fun. We had a good time.

It has become chic in the past few years to blast Black Friday. We gripe about consumerism. We blanche at stories of people tackling old ladies in order to get the latest video game.

However, I remember having good conversations with cheery people while waiting in line. I remember helping people get their deals, and others helping me get mine. There was always a lot of laughter at Denny's, and it wasn't just coming from our table.

In addition, Black Friday put items that would not normally be considered, in range.  I know a mom who gets up early every year to snag the Lego deals for her boys. The big sets are typically out of her price range, but on Black Friday those items become possible.

So, I can't join in the anti-Black Friday pile-on. I understand the concerns (though at times the delivery of those concerns smells a little like self-righteousness), but I can't apologize for my many outings with friends and family during Black Fridays past.  We enjoyed ourselves.

On this Black Friday, my wife and I sit here in our pajamas drinking coffee; while we wait for the latest lightning deal at Amazon for the nieces and nephews.

This morning I was frying eggs and sausage, getting them ready to be placed on the bread sizzling in the adjacent pan.  While cooking, I was watching Dr. Who, Season 3 Episode 10 (marvelous stuff).  I love the Doctor's view of humanity.

As I cooked and watched TV on my MS Surface, it occurred to me that the modern television writer faces a dual disadvantage that no previous writer in their profession has had to contend with.  Thirty-five years ago, there were really only 3 network stations creating story content.  Then came along cable, and throughout the 90's, more and more stations began creating original shows.  The competition for consumer viewing time spiked.

However, consider what writers face today.  There are not only the myriad of channels providing new content.... thanks to Netflix, the present writer must also contend with his or her predecessors.

I have many seasons of Dr. Who left to watch.  After that, Breaking Bad will probably be next. "Old" shows take up a great portion of the viewing time I have available.

I am even consciously avoiding shows like Game of Thrones and Once Upon A Time until the shows end - that way I can watch them straight through uninterrupted.  As one of my friends quipped on Facebook this morning.

On a side note, Netflix has also started to release its own original content... but unlike shows of the past, they have abandoned the week to week model and release a "season's" worth of shows at once.

We are living in interesting entertainment times....

Where do you think we are headed?

Facebook Faith #31 It Says So Right Here On This Napkin 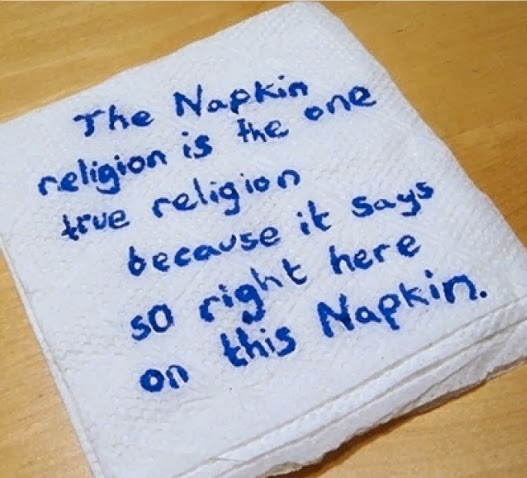 I had another eventful day on Facebook (it had been quiet for so long).  Our discussions had a good beginning, but it wasn't long before it started to get a bit circular.  One of my friends began to use the bible as justification for what the bible says.

It is a frustrating, swirling tangent that can enter in to a conversation about religion.  The frustration starts because the believer truly does not see the circular path they are walking.  They have a thick set of filters, but because they grew up with them, and live in a society that supports them, they are not even aware of their presence - the fish has no concept of being wet.


Believer:  What a glorious shade of blue our God has colored the world in!  Don't you love the blue he has made it?

Believer:  How can you say that?  Everything around us is clearly blue!  Look for yourself!

Non-believer: I am looking, and I am telling you that you are seeing blue BECAUSE you are wearing blue glasses.  See that guy over there?  I was talking to him a moment ago and he sees everything in red because he is wearing red glasses... and that lady over there is seeing emerald because of her green glasses.  You are all seeing different colors because you are wearing different colored glasses.

Believer (speaking in patient tones):  Friend... you can choose to live in denial of what is clear all around us... but denying the truth does not change the truth.  Blue surrounds us!

Non-believer:  I do not deny that you are seeing blue, but you must see that ...... hmmmm... let's try something. Will you do me a favor and take the glasses off?

At this point, one has to consider how long to keep spinning in this circle.... 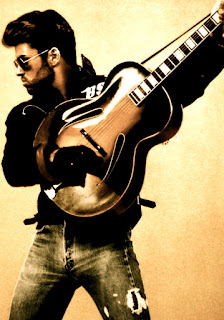 I was involved in a number of protracted Facebook conversations yesterday on the topic of FAITH.  Faith, by believers, is often presented and articulated as a virtue.  Faith takes bravery!  Faith takes courage!

Whereas non-belief is portrayed as a weak and limp position.  Belief in... well anything... is better than belief in nothing.  Here are two quotes from one of those conversations:


"It takes a whole lot of guts to have faith in something. All it takes to believe in nothing is...well...nothing. I'll take faith, thank you."


"When something is a proven fact, then it's not believing, it's knowing. Knowing, in my opinion, doesn't take as much balls as believing."

As I have stated in times past, these assertions are very disingenuous. Faith and Belief are only stated in such universal terms when the believer is confronting an atheist.  When the believer is speaking to someone of another faith, the "other" faith is usually of little value, if not downright dangerous.

As many of you know, I was a Christian for nearly 30 years.  For the past 10 years, I have lived in Salt Lake City - the heart of Mormon country.  If faith is of value, then Mormons must be getting a lot of respect and admiration from their fellow believers of different traditions because they are a VERY faithful people.

But no... When I traveled in Christian circles, I rarely heard Mormons spoken of in positive terms.  In Bible studies, the Mormon scriptures were laughed at.  From the pulpit, pastors would warn their congregations of Mormon practices.  Classes would be given about how to confront Mormon doctrine.  Parents would worry about their children being surrounded by so many Mormons.

My wife and I sat through a bible study once as one woman told the group how she was witnessing to a Mormon neighbor about Jesus.  "Her husband is not happy about her questioning her faith, but she is slowly coming around!"

When my wife and I questioned whether her efforts were causing harm to the marriage and the children, she looked taken aback.  She explained that if the friend had to choose between her family and Jesus... the choice was clear.  So much for faith being a good thing - the folks of my faith were willing to destroy a family to "rescue" this woman from her faith.

Billy Graham's website had to be scrubbed last year when Franklin put his support behind Mitt Romney for president.  It seems their ministry had plenty of disparaging things to say about Mormons prior to having need of one politically.  Faith's value is negotiable.

In truth, most believers have no more respect for faith than I do.  They find the faith of the "other" to be problematic, wrong, harmful, or silly.  Faith is only ballsy and gutsy when it is their own.

Unless, like Franklin Graham, they have a temporary need of that other... then they will scrub their language and attitudes for the moment.  When they speak to me, they will speak of faith as if it were one big happy monolith that I, unfortunately, am not taking part in.  When I leave, things go back to normal.  They will stand against - or roll their eyes at - the Catholic, the Muslim, the Hindu, the Mormon.

- while being offended that I will not give their faith the respect they believe it deserves.

I am very happy and satisfied right now. I just had some Pizza Hut pizza. It is one of the better pizzas, and I have a theory about why this is so.  I am pretty sure that they place a stick of butter in the pan, then let it melt in the oven, before putting in the dough. I am not exactly sure that this what they do, but it tastes like it, and that is what I fantasize while eating it.

Salt Lake City does not have a lot of Pizza Huts. In fact, I think there was only two when I moved into the valley 10 years ago. Yes, they were there, but I rarely drive out of my way to get anything. If a restaurant isn’t located on my way to or from work, I probably won’t be visiting it.

Ten years ago, my house was on the edge of nowhere… literally. A four lane road ended in the middle of a hill just past my house. From that ending to the Oquirrh Mountains, there was nothing.

I was impressed by the ending of that road. It was nearly three times as wide as any of the roads near my home back in Michigan… and those roads were bursting with subdivisions. Here was this massively wide road that just, ended. It told me these Utahns planned ahead.

That once dead-end road now leads in to one of the largest home developments in America. Our house was on the edge of civilization- now we are in the middle of one of the fastest growing neighborhoods in the country.

Along with that reality comes all of the shopping and restaurants one could wish for… except, it seemed, on my corner.  As the store fronts were being built, I found my enthusiasm waning as each new marquee went up: insurance, UPS, paint store, nail salon, dentist.  Could my options be any more boring?

When a new set of stores started rising a few months ago, I didn’t even get my hopes up… it would probably just be a damn florist or daycare center. Fortunately, I was wrong. One of the first signs to go up was a hiring notice for Pizza Hut!  Joy!

So this evening I dined on that delectable greasy crust.  Pizza Hut sausage make me question my asserted position on deities. The dinner pak my wife picked up included wings… I now have another reason to make that a regular stop.

Ahh Pizza Hut!  Welcome to my neck of the woods….