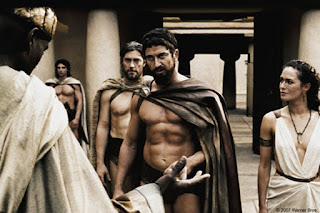 Before you speak, Persian, know that in Sparta everyone, even a king's messenger, is responsible for the words of their voice. Now...what message do you bring?

King Leonidas said these words to the Persian messenger at the beginning of 300. He was reminding the messenger that if he was bringing threats, he had better choose his words carefully.

When I was a believer, I thought of myself like the Persian - the King's messenger. If someone did not like what I was saying, they had problems with God, not me. I would say things similar to what I read on a believer's blog today:

This is a common sentiment expressed by believers.

I was reminded of another version of this redirecting of responsibility during a Facebook conversation today.  One gentleman argued:


Sorry, I can't agree with Sam Harris. To depend on the "self" to create "conditions of human flourishing" is more dangerous than even his description of religion. What I believe human flourishing is quite different from my neighbor and even light years away from someone in the far east or Africa. Also if it up to the "self" then no one has the right to judge or criticize my renditions.

I run into this argument frequently among believers ... if we don't have a god to declare something right or wrong.... then nothing can really be right or wrong. I responded:

Or everyone does, and we all have to justify, weigh, and examine our renditions. In such a case, everyone becomes responsible and has a voice, and no one gets to disengage from their responsibilities by proclaiming "I didn't say that, god did... if you don't like it, take it up with god!"

It was empowering, and a little scary, when I first left my faith to realize that I was responsible. My opinions, my actions, my choices.... and their consequences... were all on me. Leaving faith caused me to put all my ideas under a microscope... because I could no longer attribute them to anyone but myself.

Recently, it came to light that Vice President Mike Pence would not have dinner alone with a woman who was not his wife.  This sounded odd to many Americans but, having been raised in a conservative Evangelical culture, it was completely familiar to me.

Growing up, our community had a lot of thoughts and opinions about the interactions between men and women.  Unmarried people were to be guarded and circumspect when it came to time spent with members of the opposite sex.  This was talked about and preached about.... a lot. As a young person trying to remain "pure", my goal of following the right path when it came to women bordered on obsessive.  An inordinate amount of my thought life was devoted to "not placing anything before my eyes that would cause me to sin before the Lord".

Looking back, I cringe at how damaging this outlook was.  It hobbled me relationally.  I viewed half the population of our planet as "an occasion to sin".  I considered my own biology and sexuality an enemy.  There were times when I actually resented women for... existing.

We may, as a Western culture, look down on some Middle Eastern societies that drape their women in varied levels of physical covering- but many religious cultures in America entertain similar notions. The values that led Mike Pence to his conclusions about how to relate to the opposite sex, objectify and relegate women to a lower tier status as surely as any burka.