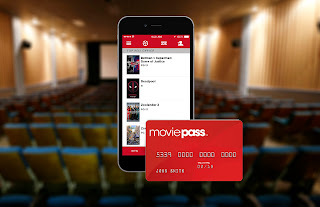 Back in August, I started seeing articles about this company that would let you see a movie a day for only 10 dollars a month.  This sounded like a typical scam scenario on the internet... if it sounds too good to be true, it probably is.

However, after reading about it on some reputable sites, I decided to give it a try.  The worst I would be out is 10 bucks.

It took about 5 weeks to get my card, much longer than they had promised. But I was also aware that there were scores of folks like me jumping on board for the first time, and this little company was probably being overwhelmed.

My Moviepass came in September and I was excited, but still very skeptical.  The program seemed straightforward enough - one standard 2d movie per day for 10 dollars a month.  But seriously!  How could they afford to do this?  One movie for the month was essentially paid for by me... and the rest of the time THEY were going to cover it?  Surely I am missing some point in the fine print. 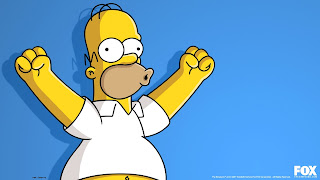 So, off to the movies I went.  To get this to work, you have to be within 100 yards of the theater.  Then you open the app and check in to the movie you want to see - at which point a timer starts, giving you 30 minutes to go buy your ticket.

I didn't expect it to work.  I swiped my card at the ticket kiosk... the kiosk indicated I had a bad card.  Figures, I really couldn't imagine this was legit.  I was about to step away when I remembered that a lot of card readers can fail on a swipe.  So, I tried it again.  The kiosk hesitated, then spit out my ticket.

I just stared at the ticket for a minute.  "No... WAY!" I said out loud.  I felt like I had just gained a super-power.

I still don't know how Moviepass can do this.  In fact, it got cheaper.  I bought an annual pass which brought my price down to 7.50 a month.

I wrote a note on a MoviePass FB page talking about how MP has changed my theater-going experience.

I went from one movie every month or two to two or more movies a week.

That means I now buy concessions... something I never did before. I am still cheap... I bought the annual popcorn bucket, which was never financially worth it before given how often I went to the theater.

I see movies by myself a lot... and I love it. Moviegoing is much more spontaneous now... and it is often too cumbersome to find someone who can grab a show on the quick. The theater has been my go-to activity when I have a few hours to kill.

I skip the previews. They used to be a highlight, but now that movie time is eating up more of my week, skipping those saves me some time... plus, I usually have already seen them.

I watch a wider selection. I used to reserve going to the theater for blockbusters... dramas and comedies just didn't seem worth the expense to fork over for the big screen.

I have realized I get more out of the movie at the theater. At home, I am distracted. I am usually working on something as I watch, or the phone rings, or someone wants to ask me something, etc. At the theater, the movie has my undivided attention.


Here are the movies I have seen so far.  The MP app keeps a history, but that function cut out for a bit in November and I am not sure that it got all of my movies added back correctly.  However, these ones I am sure about.

My popcorn intake is off the charts and will probably need to be regulated if I want to celebrate my 50th birthday next year.  I don't know how much longer this ride will last, but I am going to strike while the iron is hot! 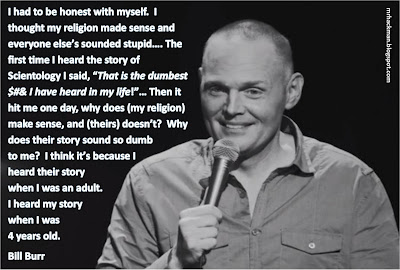 I am part of a group on Facebook which discusses 90s Christian music.  It is quite an eclectic bunch consisting of Christian fundamentalists, liberal Christians, varied levels of vague spirituality, and atheists.  For the most part, music is at the fulcrum but religious discussions happen.  I appreciate that most folks keep it at the discussion (and not argumentation) level.

Someone started a thread asking if the folks in the group considered religions like the Mormons and JW's to be Christian.  In the thread, I responded and this is part of the conversation.

Andrew Hackman - I moved out to Utah 13 years ago. One of the things that led me out of the faith was a realization, for the most part, that Mormons were simply better at Christianity than my Evangelical sect. Since I was taught that they were not even Christians, this was a bit of an eye-opener.  :)

Holly - Doesn't make them Christians, though.

Andrew Hackman - Why not? A person who believes in Christ and his teachings would seem to be, in the simplest sense, a Christian. Anyone denying that would merely be stating their preferred articulation, but that would not have any basis. Any attempt at such quickly devolves into schoolyard bickering.

Holly -"Not all who say to me, "Lord, Lord," will enter the Kingdom of Heaven."

Andrew Hackman - Sure... but every sect could announce that of every other sect... like I said, schoolyard bickering.

Holly -You don't get to merely self-identify as a Christian, you have to be incorporated into Christ through baptism according to the Lord's command. Mormons do not have a valid baptism.

Andrew Hackman - And they say you don't have a valid baptism... see how this works?


The conversation went on a little while longer, but I bailed.  When I find myself wanting to repeat something I have already said, this shows me I am not really being heard ... so why bother?

Holly could not see the folly of claiming her baptism had validity while Mormon baptism did not.  She could not understand why I felt her belief did not have a superior claim.  It is like some believers cannot achieve escape velocity, so they keep spinning around the same gravity well.  I will join them rhetorically for one orbit, but then it gets tedious.  In the past, I would have spun around in that conversation to exasperation.

Later in the thread, a gentleman referred to Mormon beliefs as "kooky".  I tried to explain that, from an outsider's view, his religious beliefs would seem just as "kooky".  No movement there either.

I have to clarify that I do know plenty of religious believers who are aware of what their beliefs look like to an outsider, and so are careful in how they approach the belief structures of other religions.  They do not try to supply objective certainty to something that is inherently a subjective experience.