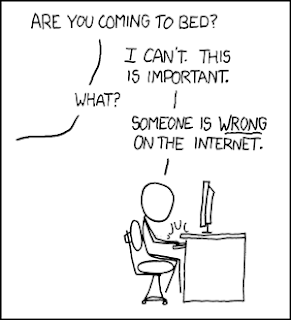 This conversation occurred on my wall on Facebook, and I wanted to blog it here (as well as commentate) before it faded into Facebook history. One of these days, Facebook needs to make searching through old material more extensive than its present linear process.

I shared an article that addressed my belief that forcing "Christian" law on someone is just as intolerable as it is to force "Islamic" law on someone. (I brought this up a few months ago too and had a few "defriendings" occur for holding such a position.) The conversation that followed was interesting to me and I think it shows examples of a lot of viewpoints.

I want to commentate on two items. First, my friend Kim brings up the issue that poorly behaving Christians in the present and in the past, by virtue of their behavior, do not get to lay claim to the name Christian. I hear this argument regularly in Christian circles (in fact, I just heard it again yesterday) and I don't think it is valid. It is just too easy to say that every bad Christian is not really a Christian. To me, it would be like saying that every communist economic system that failed wasn't really communist (after all, says the communist, if it were really communism it would not have failed). You can't just dissociate from every bad egg in your group.

Second, my brother Steve contends that most people's negative feelings in regard to gay marriage are not religiously based - religious folks are simply the loudest on the issue. I don't buy this point either. In fact, I have NEVER heard a secular argument against gay marriage made. If anyone is aware of any studies on why people are against gay marriage, I would love to see them.


Andrew Hackman
More threatening and more real than Sharia Law is theocratic laws dictated by the Religious Right. I find any group threatening my freedoms to be equally immoral... regardless of what god banner they carry.

Ralph Reed and the People Who Want to Impose a "Christian" Version of Shariah Law on America
www.huffingtonpost.com

Members of the Religious Right say they fear Muslims imposing Shariah Law on America. This isn't about to happen. But what is taking place is a home grown movement to turn America into their version of a modern day theocracy -- say, Iran.