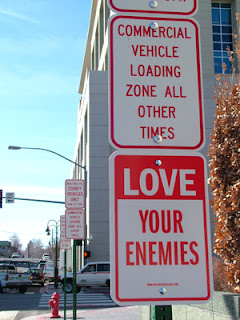 But the gateway to life is very narrow and the road is difficult, and only a few ever find it.

A little over a week ago, Bill Maher gave a scathing critique of the popular Christian ethos. For most of Christianity, this critique went unnoticed. After all, most Christians don't tend to listen to Bill Maher - a liberal leaning Atheist with a propensity to drop the F-Bomb. However those who did, tended to respond to Maher with derision - He is an Atheist, what does he know about Christian ethics?  or  He hates Christians, and this is just another slam!

Maher was pointing out that American Christians tend to be more pro-war, pro-torture, and pro-military than the average citizen. This brought forth some sardonic wit from Maher as he noted that most of Jesus' quotes run contrary to the attitudes of many of his followers.

One can't blame Christians for being a little uncomfortable. If you are religious, the last thing you want is to be outfoxed by an Atheist who is pummeling you with your own scriptures. To top it off, Maher points out that the best historical example of someone living the Christian ethic was carried out by a practicing Hindu.

What is apparent to me, as I read the various responses to Maher, is that Christians don't really believe they are capable of loving their enemy. Loving your enemy, doing good to those who wrong you, turning the other cheek.... these have all been moved to the miraculous category. Yes, Jesus loved his enemies... but he also walked on water and raised the dead. In the minds of most Christians, they no more believe an enemy can be loved than they believe they will walk on water this evening. So, they quickly move past these commandments to ones that are more do-able... say, witnessing or going to church.

I also think Christians struggle to take these teachings seriously because their faith is often built on a  faulty foundation. To love your enemy, you are going to have to put aside your needs, your pride, your need to be right - perhaps even your safety. You have to give up self-protection. Your ego is going to have to die... daily.

However, most Christians turned to the faith by an appeal to their ego and their sense of self. Jesus will save you from Hell - saving one's own ass is a primal response.

Then there is the Christian who follows Jesus because Jesus is going to make them happy, or healthy, or wealthy. Following Jesus causes blessing after blessing to fall their way.

With all of this ME cemented into the foundation of popular Western Christianity, is it any wonder that enemy-love gets scant attention from Christ's followers? Go to a Christian church in America this Sunday and you will most likely hear a message about Hell or what blessing God has in store for you next. A message on how to do kind acts for the person who opposes you, hurts you, hates you? How to joyfully surrender your rights and protections? Not so much.

But anyone who knows scripture knows the ways of the Divine tend to be a little counter intuitive. Look at Maher's two examples of people who followed the teachings of Christ. He spoke of Gandhi and Martin Luther King Jr. with honor... those who humble themselves shall be exalted and established.

Please don't think I approach this tritely or as if it is easy. I don't often despise people, but there is someone in my life right now that I do. Every word this person speaks, their very presence raises my blood pressure. I literally take joy in speaking badly of this person to others.

If someone forces you to go one mile, go with him two miles... You have heard that it was said, ‘Love your neighbor and hate your enemy.’ But I tell you: Love your enemies and pray for those who persecute you, that you may be sons of your Father in heaven.

It is after hearing such words that I want to drop one of Maher's F-bombs; cause' it is hard and I don't want to do it. My ego and sense of self screams out for protection. But if we are ever to change this world, truly change it, it is the only way. Ghandi and MLK proved it. Jesus proved it.

In the great spiritual traditions, the wounds to our ego are our teachers and must be welcomed. They must be paid attention to, not litigated. How can a Christian look at the crucified and not get this essential point? ~ Richard Rohr

As an Atheist I don't have the issues with doctrine, but I try to be caring to everyone. I fail quite often, but I keep trying. It truly is a hard thing, and it certainly doesn't come naturally. If you figure out how to do it, let me know!

Thanks Andrew. I was just talking to a friend who does not profess Christianity but has just finished a stint working for a church-based organsiation which treated her very badly. She is one of the most ethics-driven people I know and took it very hard that they were so dismissive of her work and so vindictive. I often wonder about that myself - how much have we used our church insitutions to put a shell around ourselves and protect ourselves from Jesus' teaching?

For this reason here in my beloved city of Portland if religion comes up I identify myself as "someone trying to live her life the best she can according to the teachings of Jesus." To simply leave it at, "I'm a Christian" now carries a certain amount of negative stereotyping, the kind of which, unfortunately, Maher honed in on rather than present a counter view of Christ followers who have a long tradition of resistance to violence like the Quakers. Or the religious objectors who have to be accomodated in the military. He's a really smart guy, I have watched his show many times. His oversights when he gets ranting are hard to ignore. Like his film, Irreligious, he made so many wonderful points, yet the gaps were so big in that it seemed to be a Bash-fest towards people of faith.

Would love for him with his huge influence and celebrity power to use that platform to promote respectful dialog. Instead, he seems purposefully inflammatory and xtians like me are left wondering, Are we really all assholes like he makes us out to be?? But then I think of the hundreds of kind souls I've met over the years who serve the poor, minister to the forgotten and quietly go about making the world a better place. They won't get a mention in a Maher rant as it doesn't make for very sexy tv.

Love so totally is the narrow path.

Great post! And thanks for including me on your blogroll. I like your writing. I'm subscribing right now to your blog!

Loving your enemies is extraordinarily hard. And I don't mean "enemies" as in your next door neighbor who you don't get along with very well. I mean someone who has truly hurt you. However, to claim it is a miracle only Jesus was able to accomplish is, in my opinion, a pathetic cop-out. Anyone who says that just doesn't want to try, probably because they cannot imagine putting down their own ego.

In my experience, Christians sin no less than non-believers. Despite that, some Christians feel that their beliefs alone make them superior, even if there is a million atheists who are kinder and more loving than they are.

Excellent! Excellent! I totally agree with you. Christianity has become, with some few exceptions, the ME cult.

The essence of real Christianity or at least what we think is real Christianity. Who knows but I do know the words of the Jesus in the Bible are hard words, difficult to follow, and would change the world if we followed them. As an atheist I don't put any stock in the theological issues or matters of divinity but I am concerned about how to best live in this world. This is where I find great value and importance in the words of Jesus you mention here.

To love your enemy, you are going to have to put aside your needs, your pride, your need to be right - perhaps even your safety. You have to give up self-protection. Your ego is going to have to die... daily. However, most Christians turned to the faith by an appeal to their ego and their sense of self.

Wow! Just wow. Nice to meet others who get it. This may be the very reason my blog exists.

I watched that episode of Maher and was almost clapping when I saw that commentary at the end of his show - spot on.

For me, following Jesus' teachings should be challenging - and of its not - then we really aren't 'wrestling' with some of the concepts you mentioned.

Loving your enemies is really about realizing the only person that can make an 'enemy' - is yourself. Once we start to realize these kinds of things we tend to make less enemies and see people as 'equals'...which they really are. Politics and country make enemies within the media, is this really something Christianity should be touching? I would say 'no'.

I also like the ideas of humility and going that extra mile, they are meant to remove you from a comfort zone that focuses on 'me' and not the 'other'.

But love is something that takes a lifetime to learn to do well...I think we are all trying to take these ideas and see how they work within our lives and within real living situations...which is always the point where we learn and re-assess.