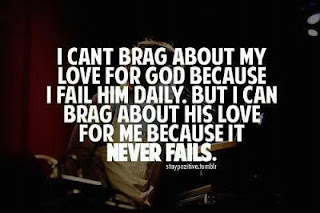 Probably half of the posts that drift through my newsfeed on Facebook are from friends and family proclaiming something about their god. Sometimes it is a saying or idea that would fit well into any healthy personal philosophy, but very often there is something damaged being proclaimed. I think I may make it a regular feature to take an example like the picture on the right and address how, I believe, it is problematic.

The writer fails his god daily? Really? He got up this morning, made his coffee, went to work, took the kids to soccer practice in the evening, read them a story before putting them to bed...

Well, in truth he did not; but he has been programmed in his faith to THINK he did. His default position is to think of himself as a failure before his god.

The above phrase was posted by a Christian. The common view of God in Christianity is that of a father. Can you imagine a father who would encourage his daughter to think of herself as a failure before him? What would become of such a child?

You don't have to imagine very hard. Most of Christianity holds such a view of their Father God. Look throughout Western culture. Is it any wonder that the Christian religion in the West struggles with control issues? People who carry a broken self-image are going to struggle with relationships.

Here is a lighter version of that same kind of post. 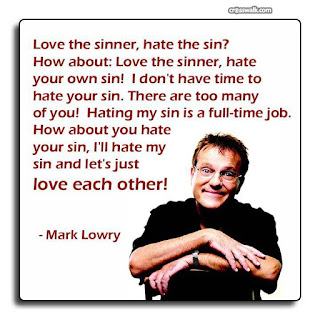 Christians like Lowry are trying to move more toward the love side of the equation... yet he still sees himself as drowning in "sin". Even though he has accepted Jesus, been washed, redeemed, sanctified, justified.... whatever... he still appears to see himself in a largely negative light.

This is bad, bad, bad for the psyche.

My Christian friends and family... you will probably stay Christian... but can you at least eject this very damaging self view? If you do something wrong - repent, make restitution, apologize, make it right as best you can. Then let it go.

Letting your default life position be that of a failure and a wretch is a choice. It is a choice that harms not only you, but all those around you.

The writer fails his god daily? Really? He got up this morning, made his coffee, went to work, took the kids to soccer practice in the evening, read them a story before putting them to bed...

This. I can't wrap my mind around the guilt mentality. And the thing is I thought the same way just a few years ago and I can't remember why it was important to hold onto that broken self-image.

My transition away from this mentality was just that, a transition which took years. When you are raised in the faith it takes time to unlearn seeing ourselves as not worthy. It was like a horrible dream where you know it was bad but the longer you're awake the more faded the dream becomes until you can only remember that you had a bad dream.

This is one of my favorite posts. I'm sooo sharing this on Facebook.

Sam - I too thought like that and it felt completely normal... yet now that I am out... WOW!

On one of our last few visits to church, one of the pastors was saying how unworthy and lowly we are... but thanks to Jesus, God loves us. My wife said she wanted to cover our children's ears. A few weeks earlier she had tried to explain it away... she used to enjoy the messages so much, but lately they seemed... off. I told her the message is what it always has been... we just hear differently now.

I hear these self destructive mutterings so often from my Christian friends and family... but to point it out wouldn't help... you speak of that transition... I am wondering what spark caught our eye to dig ourselves out from this thinking.

I wonder how many people realize how spiritually and psychologically toxic this can be, especially to those who are plagued by poor self-esteem. This isn't humility, its self abuse.

Hi Andrew, I think you make a good point about this. You're probably aware of Matthew Fox and "creation spirituality" which was popular a while ago. Their idea was that we needed to balance the idea of "original sin" with "original blessing" - we are made in the image of God and he saw what he made and thought it was "very good".

Often the idea of original sin is used to shame people into faith. That seems counterproductive as you say. I think the point is that we are mostly not failures in human terms - we are no worse than our fellows - but are failures in God's terms because we fall short of he/she wants so much more from us than we give.

I also think there's a humanist version for those like you who no longer believe in God or gods. It is that we are not what we aspire to be. When we look at things like the extent of poverty around the world, or our ongoing destruction of the environment, we know this to be true whether we have theology to tell us so, or simply our own consciences.

My heart breaks for Mark Lowry, and has for years--even back to my believing days. It doesn't take a rocket scientist to see what his "sin" is, and i just want to shake him and say, "There is nothing wrong with you!"