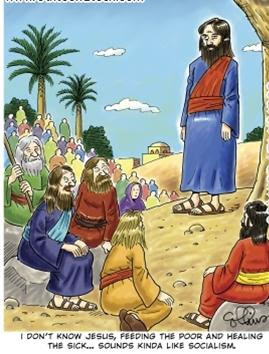 One of the statements you will hear from some Right Wing conservatives is that they are FOR charity and helping the poor; they simply do not want the government telling them they HAVE to do it. On the surface that sounds legitimate, and in some cases it may be true; but I have always felt the declaration was probably a polite fiction.
I have heard Glenn Beck make similar statements on his show, but this week he opened the door of his conservative heart and has shown us what he and many of his followers really think. If it were just about government compulsion, then we would not have heard his statements regarding "running" from churches who are concerned about issues of social justice. It is not merely the government... he does not want voluntary organazations participating in the issues of social justice either. He feels that "they" got to our government, and now "they" are getting to our churches.
Well Glenn, "they" seem to have gotten to Jesus too.
"For I was hungry and you gave me nothing to eat, I was thirsty and you gave me nothing to drink, I was a stranger and you did not invite me in, I needed clothes and you did not clothe me, I was sick and in prison and you did not look after me."
They also will answer, 'Lord, when did we see you hungry or thirsty or a stranger or needing clothes or sick or in prison, and did not help you?'
He will reply, 'I tell you the truth, whatever you did not do for one of the least of these, you did not do for me.'

Thanks Eruesso! I appreciate you stopping by!

Notice in the scripture you quoted, it was the person choosing to directly help his fellow man.

Everything is about choice. You can choose which church you join and follow so choose wisely what precepts they follow.

I would rather choose for myself.

Besides, it isn't "polite fiction" that conservatives give more than liberals do to charity.

But my point is, that Glen is now vilifying and lumping in with Nazis churches that work for causes of social justice. Voluntary organizations with volunteers doing the work. So it is now evil to do this as a group? We are now so individualized that charity can now only be legitimate if I do it by myself?

The whole "compulsion" argument is a canard. The point of social justice efforts, whether by the government or by individuals, is not to make the giver feel good, but to solve a problem. Those who say that helping the poor should not be forced are essentially implying that the status quo that produces the injustice in the first place is somehow the product of free will and free choice and to use the government to rectify injustices somehow intrudes on the natural order that was arrived at voluntarily. This is, as you point out, a fiction, essentially a convenient lie. The victims of social injustice do not choose their fate, and to suggest otherwise is insulting to the poor and nonsensical. The forces, mostly governed by free markets and corporate profits, that result in some people getting a lot and others not getting much, are in fact coercive, but you don't hear the "don't force me to be charitable" crowd complaining about that form of coercion. And yet they howl that correcting a coercive process that results in injustice is bad because it is itself "coercive".

Of course Glenn Beck is an idiot and his complaints about social justice in religion are because he correctly identifies that to even identify the status quo as an expression of social injustice is to acknowledge that a problem exists at a societal level. If you worship at the alter of market forces then of course there is no social justice to address. To be in denial about the coercive nature of social forces that allocate a lot to some and virtually nothing to others is to attack those who would seek to rectify the injustices, through whatever means they choose.

One point of clarification... In the scripture I quoted, it was not a person helping his fellow man. It is in Matt 25 and Christ is saying that the nations are divided before him.

I do not have strong opinions on this, but I think there is an argument to be made that we will be judged not only individually but, as this scripture hints at, communally.

I find it interesting that most conservative Christians would answer the rhetorical question "Am I my brother's keeper" in the affirmative and then oppose any government action towards being our brother's keeper.

Well more conservatives go to Church so I suspect they give more to the Church (a charity) That said...........most of Church giving goes towards buildings, staff, and programs. Very little money, % wise, goes towards helping the poor and marginalized.

So it IS charitable giving but it is not very charitable.

Unfortunately many conservatives seem to have lost any understanding of what a social contract is. It is every person for themselves.

sideline response to a pet peeve of mine...
the question "am I my brother's keeper?" scripturally carries with it an implied answer of "no" in the original context (Cain responding to God with this question after he has killed Abel. if the implied answer was "yes", then Cain would not have replied to God's question this way. "no Cain, you're not your brother's keeper, but you're also not supposed to kill him"). for some reason it drives me crazy when christians assume the implied answer to this rhetorical question is "yes", to the point that they start national movements based on it...
anyway....carry on. :-)

There is no doubt here that Glen Beck comes off like an idiot. There is also little argument that charitable giving to any institution with a high overhead has a miniscule overhead.

I think in Utah, when we reduce what we will pay in income taxes by diverting 10% or more of our income religious charities (diverting it from schools, dental care for the elderly) and then claim we have no control over how the government will spend it we are definitely engaged in spinning "polite fiction".
You also have no control over where your church spends it. When we see land grabs, 3 billion spent on commercial real estate ventures all with money that was seeded through "charitable donations" we cannot claim the purpose of the money was to lift the down trodden. Too often churches forget their mission to 'social justice' in favor of empire building.

God asked where Abel was. Cain replied am I my brother's keeper?

God was asking Cain where Abel was. (If God is truly all-knowing then the question was asked for Cain's benefit, thus it was a rhetorical question. God already knew the answer.)

So the answer was yes. Cain was responsible for and accountable for where his brother was.

But, let's put this squabble aside because I am quite certain you are going to disagree with what I have written above. (people rarely change their pet peeves) :)

Libertarianism is not supportable from Scripture.Scripture supports an admixture of capitalism and socialism. The politics and theology of Glenn Beck have no foundation in Scripture.

Now this is an academic exercise for me. I don't think God, if there is a God, is involved in what goes on on earth at all.

It is up to us, not God, to make a difference in the world. That's why it is vitally important for each of us to be our brother's keeper.

What Glenn Beck was talking about was denominations that support abortion, homosexuality, euthanasia, racism, laws like healthcare that pay for abortions and sex change operations and other unAmerican values like redistribution of wealth all in the name of "social justice". One example would be denominations like United Church of Christ that Obama belonged to: http://www.ucc.org/justice/issues.html
or pastors like Jeremiah Wright (he married the Obamas) at Obama's old church for 20 yrs the Trinity United Chrurch of Christ, the same UCC.org denomination above, who spew racism and curse America: http://www.trinitychicago.org/index.php?option=com_content&task=view&id=114
Go to Youtube and search Jeremiah Wright and you'll find racist comments like this:
http://www.youtube.com/watch?v=c3wh2XT4e8M&feature=related
THESE are the churces Glenn Beck is telling Christians to leave

I don't think Glenn Beck ever really knows what the heck he's talking about. He's extremely short-sighted on most issues. Even if at times he may be right (in my opinion is never) on an issue, it gets so lost in his lies and rhetoric that you can never really trust what he is saying.

Yes, $3-4 billion on a mall when people in Haiti are homeless seems just about as Un-Christ like as one could get.

Yeah, Mystical nails it in everything he writes! :)