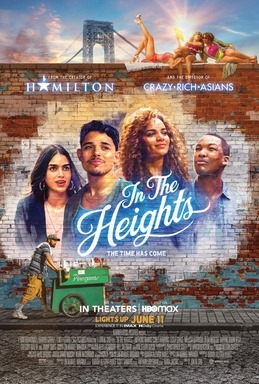 The Conjuring – AMC “Fan Fave”.  I had not seen this since it came out years ago, but my daughter and I have followed the series religiously.  This one is definitely the best of the lot. A horror movie that draws you into the story so you can be scared and unnerved along with the characters.  Such a movie does not rely on jump-scares.  And in this one, The NUN is truly scary (not so much when she got her solo flick).  B+

The Conjuring: The Devil Made Me Do It – A worthy successor in the series.  This one focuses a little more on the drama of the Warrens.  In many ways, it feels more like a detective story and less like a horror story.  I liked it but my daughter gives it higher ratings.  B-

In The Heights -  Just a delight.  I laughed, I cried, and was completely swept up in the story.  I enjoyed it more seeing it my 2nd-time last night.  There is a lot of fast sing-dialogue (it is Miranda after all) so I was picking up clever lines and nuances of story I missed on my first viewing.  I will probably catch this one again this week.  A-

The Misfits -  This heist movie felt more like some of the low-range quality we get from Netflix originals nowadays.  It had a few worthy moments but in general, it was just spotty and awkwardly paced. D+

F8: The Fate of the Furious – Another AMC “Fan Fave”.  This was my first for this series of films.  Not my cup o’ tea… but if you like lots of muscle cars and campy dialogue, here ya go.  C-

The Hitman's Wife's Bodyguard – I would have thought a Ryan Reynolds, Samuel L. Jackson flick would have been a shoo-in.  However, the actors just didn’t have chemistry, I rarely cracked a smile, a classic flop.  D-

F9: The Fast Saga – Like F8 the week before, this is car chases and campy dialogue.  However, it lacked the presence and banter of Jason Statham and The Rock to keep it afloat.  After an hour and a half, I realized I still had an hour to go… and just couldn’t work up the interest.  So, in a rare move, I left.  F