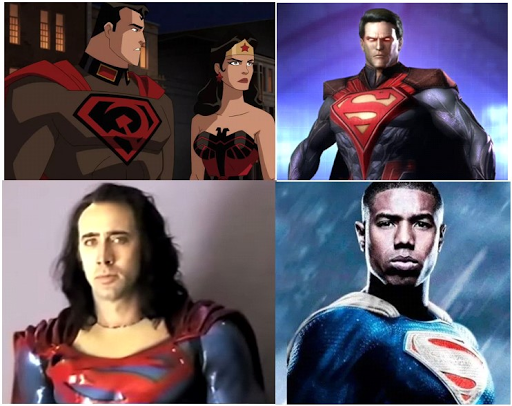 Putting different spins on canon comic characters has been going on since... forever.  In fact, Marvel once had a monthly called "What IF" that looked at just such stories - What IF the spider had bitten MJ rather than Peter Parker?  Disney+ will be doing an animated Marvel series of these stories this summer.

Superman is a favorite for such tales.

In one story, called Red Son, Superman lands in Russia rather than Kansas and no longer fights for the "American Way".

In the popular game and comic series "INJUSTICE", Superman becomes an overlord of Earth after Lois and his unborn child are killed by the Joker.  He rules with an iron fist and kills heroes like Shazam.  Snyder was clearly hinting at taking the character in this direction in his movie "Justice League" which premiered on HBO a few weeks back.

And do you know HOW CLOSE we came to having Nicolas Cage as Superman??  The script was written and they were outfitting the man who stole The Constitution with a big S and a cape!

Yep, everyone loves a new spin on the Superman legend.

Apparently, for some folks, asking "What if Superman were black?" is pure Kryptonite. Warner Brothers is getting a lot of hate mail, written with smoldering Crayola's, by fans who do not want to see a black Kal-El on the silver screen.

Me?  I'm all in!  Just give me a second to run to the concession stand and grab a popcorn and soda.