No Place For Reagan 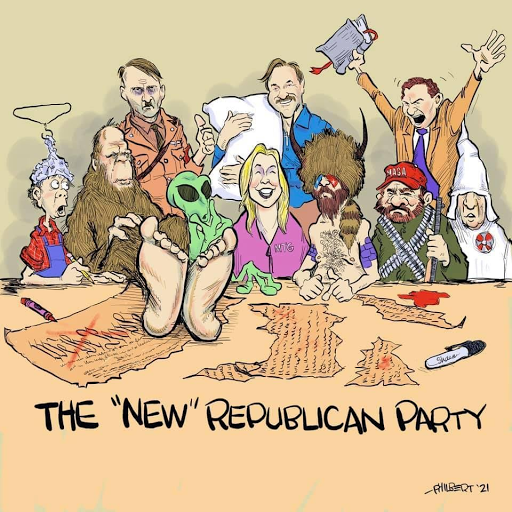 There is no place for a Reagan Republican in the GOP right now.  Oh, like Jesus, they will use his name... but they would have no interest in implementing his ways.

The Democrats have their extremes... and they often grab headlines.  But the election of Joe Biden shows that Democrats have formed a coalition.  Biden went out and sought the vote of all Americans and in the process, he even got many conservatives to join its big tent.

Meanwhile, the GOP under Trump focused on a much narrower field.  They pushed away their moderates and focused on their extremes.

It is time for a new conservative party in America... one based on policy and principles.  I know there is hesitancy with some on that idea because they believe it will hand America to liberals for the next 20 years.

I really don't think that is the case.  Right now, there are folks voting on the Democratic side who do so ONLY because the GOP is so crazy presently.  They pine to vote "Republican" again.  Also, there are folks voting with the GOP who are doing so only under duress.  They hate what Trump has done to the party... but fear speaking out will just get them "primaried".  Decades of loyalty can be wiped away in an instant right now in the GOP for failing to lick the boots of the leader.

Democrats have conservatives, moderates, leftists, and their extreme.

The GOP has sidelined everyone but their extreme.

I agree to an extent. The GOP seems to have lost its collective mind, bowing to Trump and the extremes who, right now, control the narrative. But I believe there is a remnant within the Republican Party that will bring it back to its senses. It might take a while for that to happen, but those seven GOP Senators who voted to convict at the conclusion of the impeachment trial are a good start. (I'm independent and I voted for Biden, but I think it's the first time I've ever voted for a Democrat for president. So I suppose, in a way, I help make your point, but I often vote a split ticket).