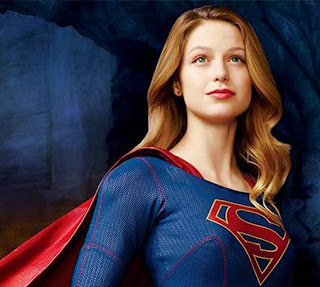 Supergirl was leaked months ahead of its debut. I tend to think this "leak" is actually a beta testing. If so, I hope they make use of it.

First, what I liked. I think Melissa Benoist is going to be an outstanding Supergirl.  I always love when an actor can communicate as much with a raised eyebrow or a curl of the lip as they can with a line. Benoist's face literally broadcasts her emotions. She is fun to watch and I enjoyed her character. She can carry this show.

It is clear that the producers are going for a lighter tone - more CW Flash than WB Man of Steel. It's working for The Flash, so I tend to think this is a wise move.

I loved their take on Jimmy Olsen. Rather than the innocent newbie, it was great to see him portrayed as a seasoned photo journalist. If this show goes long term,  I think they would do well to give him lots of story time.

Ditch the opening scene. Change it, or skip it all together. The opening should be powerful, but this looked like something from an old Saturday morning kids show. Their planet is about to be shredded, parents and child are saying goodbye forever.... and the scene was delivered with all the emotion of ordering a #3 meal at the drive-thru.

There is a scene in the Simpsons where Lisa wants to be subversive and signs up for the community football team. She is deflated when she arrives at the first practice to find out there are already girls on it. At least a half dozen times in Supergirl they stop the story in order to announce, "the hero is a girl.... weren't expecting that, were ya!" Except we were... we are. We are totally cool with female superheroes and have been for awhile. Only certain strands of Hollywood seem to think there is something awkward about female hero leads. When you keep referencing it scene after scene, you sound like you are trying to talk us into this concept.  We are great with it... why can't you be?

Something needs to be reworked with the Superman references. His being on the planet, and yet never talking to her, never seeing her... it just felt rather unbelievable.  Not sure what would work, but I am sure this approach doesn't.

All in all, there is some great potential here. I enjoyed the pilot.