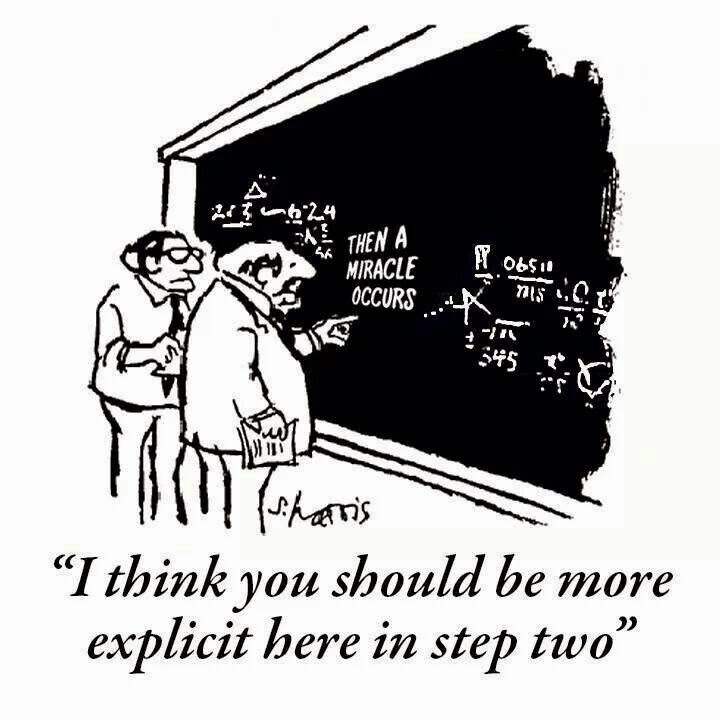 A religious friend posted an article this morning.  In it, the author goes into an often used argument that the edge of scientific discovery serves as a proof of a deity.  Not just any deity of course, it proves his deity.  The line of thinking goes like this : "Science cannot account for items like String Theory.  It is beyond our knowledge.  Where man ends, God begins!"

Of course, 100 or so years ago, it was germs, before that, the revolution of the planets.  In ancient times? Hurricanes were obviously from Poseidon.

Wherever the new frontier is in scientific discovery, there you will find the faithful trying to make the case for their deity.

The interesting thing to me about this pattern is that people seem unable to connect the dots in the pattern.  They think it absurd that humankind once attributed lightning to Zeus or the seasons to Persephone.  They feel the church was awful for persecuting thinkers like Galileo and Jean-François Champollion. Yet most religious Americans fail to see their similar absurd and persecuting attitude toward science when it comes to things like evolution or the age of the Earth.

I recently heard a talk by John Dehlin.  He made a similar point when it came to ethics.  He said we all have moral farsightedness.  It is clear as day to us in the modern era that no person should be made a slave and that women should have the right to vote.  Yet one does not have to go far into history to find people who went to prison or endured public rejection for announcing these obvious truths.

Ethics are clear in hindsight, and it is easy to spot an illogical perspective in an outside group. However, when we are in the moment, or when these things are part of our community, we can miss them entirely.


The first principle is that you must not fool yourself... and you are the easiest person to fool. ~Richard P. Feynman


I felt that the article was nothing more than an apologetic piece and I commented:


One thing that has become clear to me since leaving faith is the motivation of this kind of apologetic maneuver - quiet any questions within the camp. And it works. It is the same maneuver that quiets questions among the Mormon faithful when genetics becomes a sticky wicket. Eyes are rolled when OTHER religions do this maneuver, but it makes sense for our group to think this way. Our religious stories are true... But theirs are obviously wrong.


That tendency in my faith to move the goal posts was one of the things that helped usher me out.  My Evangelical brothers and sisters would often mock our Mormon neighbors over their belief in the Book of Mormon - when so much of it had been scientifically and historically PROVEN false. Mormon belief, in denial of EVIDENCE, was simply an indication of how deceived they were.  Yet those same attributes of denying history and science to defend religion, when practiced by folks on our team, was an indication of faithfulness and steadfastness.

Ultimately, the article works because it was proclaimed in the religious echo chamber.  The author is convinced of his spiritual reality, writing to a crowd of the equally convinced.  He wants to let the faithful know that science backs them as well.  His argument would not bear up under the scrutiny of a first year science student.... but that is ok, his audience has moved on, content that they know science too.

Applying the same scrutiny to my faith as I did to Mormonism was a major player in my trip out of religion. That was a big flag waving in my face for so long. I remember youth leaders teaching us kids about how crazy Mormon beliefs were, and I just kept thinking, "Those aren't any more ridiculous than ours...they're just newer." It took me a long time to pursue that line of thought to its natural end.

My exit was similar in that way. Watching my evangelical friends make fun of my Mormon friends... for what were essentially the same follies... got my wheels turning.

I THINK I would have eventually left the faith even if I had not moved out to SLC. However, I think it would have been more difficult, and would have taken many more years.