Facebook Faith #41 Phelps is Dead. At Least He Died Honest. 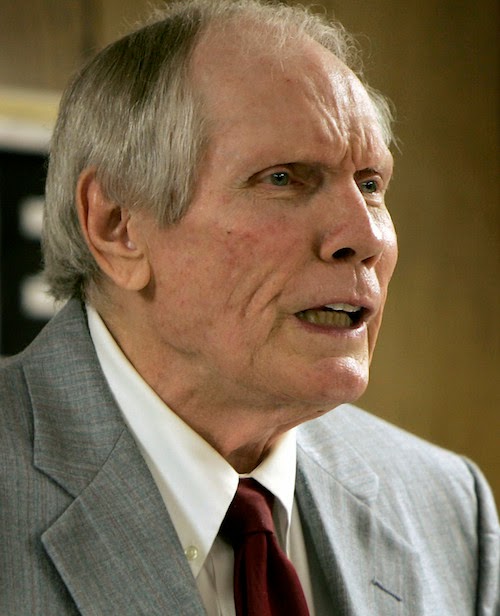 It has been good to see so many folks taking the high road when it came to Fred Phelps' death. Even people who had been personally wounded by him chose to turn the other cheek and wish his family well.

It would be easy to hate Phelps. When I first heard of his death, I must confess that my internal response was not a gracious one. So much pain perpetuated by one man did not seem deserving of even an ounce of good will. I reminded myself that here was a man so plagued by his personal demons, so wounded and broken, that he fashioned himself a god that demanded him to wound others. His religion became the vehicle for his venom.

Yet, I have to give him this... he was honest. You knew where you stood with the man. He and his god thought the rest of us were lower than the gunk on his boot - and he did not hesitate to look you in the eye and tell you so.

Contrast that with so many other religious folks who smile at you warmly, speak in soft tones, and tell you they love you. Meanwhile, they are preparing their blade as they invite you into an embrace. What they say to you, and what they honestly feel, are two different things.

I watched this play out on a Facebook page recently. Phelps' death was being discussed and one Christian man commented that his treatment of the military was regrettable. Apparently, he only viewed the military treatment as problematic. He then went on to clarify that homosexuals were an abomination.  They should not be allowed to marry and they should stop being gay. To have an alternate view is to stand against god. Still, he said he didn't hate anyone and would pray for all of us.

I hear a lot of Christians giving very similar rhetoric. I think of it as Phleps-Lite. This is where you get to hold to every position of Fred Phelps, but believe you are somehow different because you deliver that same message with a smile and a hug. 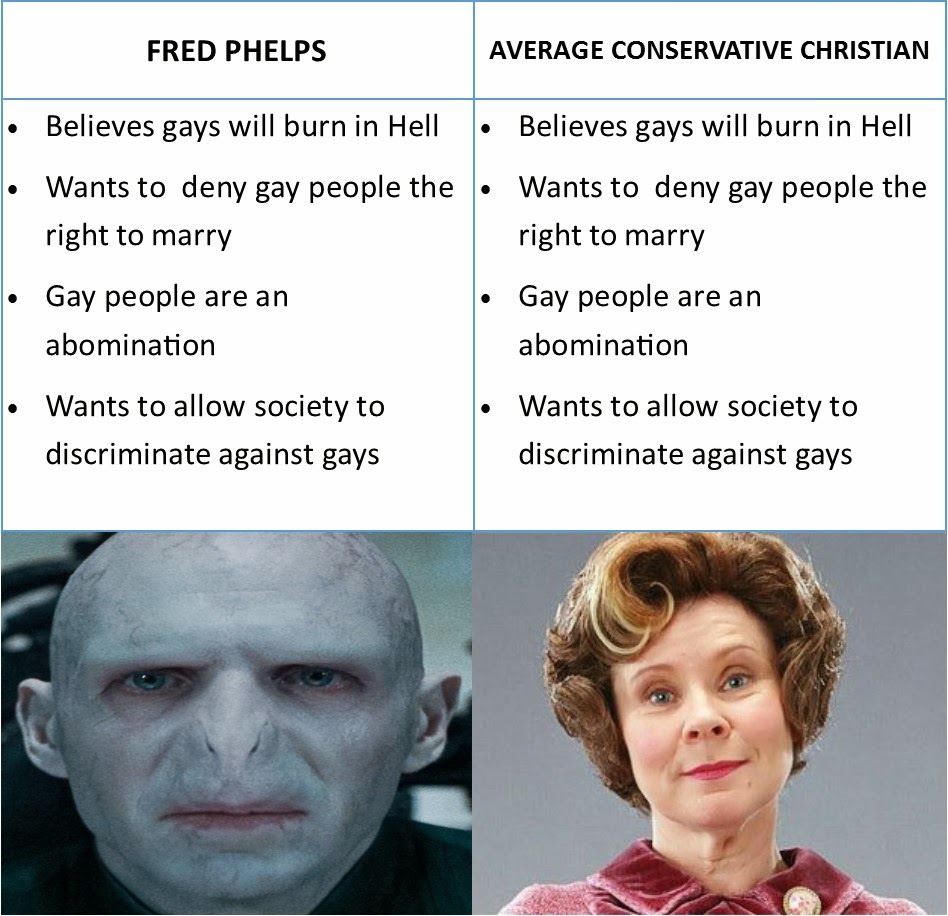 To me, the only difference between Fred Phelps and the average conservative Christian is delivery style. It is similar to Delores Umbridge and Voldemort in the Harry Potter story. Both stood against Harry. Both wanted him eliminated. Both hated him.

Voldemort's hate blazed in his eyes. Delores hid hers behind soft tones, feigned concern, and a predator's smile.

But both had similar plans for Harry.

I don't believe there is an afterlife, but if I did I would hope that Phelps can now rest from the burden of his hostility, and that his wounds have been healed.

In the end, I preferred the bigotry Fred wore on his sleeve, to the slippery words of "love" offered by so many Christians who quietly share Fred's heart.

I would have to question your post. I think there could be a difference in heart attitude and motives. I don't agree with the position of the conservative Christians relating to gay issues, but I think many hold these positions very sincerely believing that people and society can be harmed by same sex marriage, and what they envision as the "gay lifestyle." They may be motivated by genuine concern, if misplaced.

I think Phelps was motivated purely by hatred. I never was able to sense the love of Christ in Him at all. I've never felt that most conservative Christian people actually want to destroy gays.

I don't doubt that these folks believe that gays are harmful, but again, how does that differ from Phelps? He may add a measure of personal disgust, but their goals for homosexuals are strikingly similar. Again, someone may even have a measure of concern for a homosexual, but if their end goal is the same as Phelps... aren't we just talking about a difference in the delivery of the message, and not a difference in the message itself?

Hmm, I agree with you in general and I think you are describing the religion of the Pharisees, which many Christians unknowingly subscribe to (also many atheists, but that's another issue). However, I think there's some point in what Rebecca says because in the world of the Pharisees you have to separate what people do from what they say. The real test is, if a person has a workmate or neighbour who is gay, how do they treat them?

Jon - I don't think it is just how they treat them, but what they think about them. Again, to go back to Umbridge... from all outward appearances, she was the face of peace and reconciliation. I keep hearing from believers who say they love homosexuals... and yet are trying to secure for them a lower tier in society... both legally and culturally. If that is how someone wants to demonstrate love, I'll pass.

However, I am aware there are more broad minded and inclusive theists out there, and I don't mean to lump them in the group.

Hi Andrew, sorry to come back into this late, I know everyone else has moved on but I've been offline for a few days trying to get some work done:). I was thinking about the parable of the two sons whose father asks them to go into the field and do some work. One refuses, then goes and does it, one agrees but then doesn't. Which one, says Jesus, does the will of his father? It's obviously a pointed message to the religious hypocrites of his day but then they are there in every generation.

The thing about Dolores Umbridge was that she was just as nasty as Voldemort but did it with a smile - a truly scary person! On the other hand, Severus Snape always appeared evil and hostile towards Harry but repeatedly came through to save the day.

I think the same exists in the Church. There are people who mouth words of love towards gay people (or others) while treating them poorly, and then there are people who express formal assent to the church's condemnation of gays but actually treat them well.

Of course there are also those express love for gays AND treat them well, and those who do neither. People are a complicated lot!

I always have loved that tale of the two sons... it is simple, but there is so much going on there.

Great additive of Snape there... one of my favorite characters.