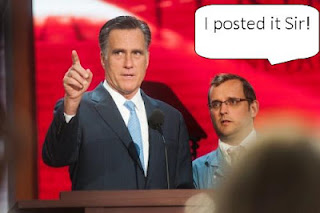 I was wondering how Mr. Romney would address Labor Day today. After all, he has spent the majority of his adult life serving as an oppositional force to Labor. Owners typically hold more power when their labor is unorganized than when they are organized. Therefore candidate Romney, and the circles in which he travels, has always had a vested interest in keeping labor unorganized.

So, how does Mr. Romney say something positive on Labor Day?  Somehow, I think the conversation this morning went something like this:

Aide: Sir, we have to put a quote on your Facebook page about Labor Day.

Romney:  Could we announce that Unions are dead?

Romney:  Hopefully by this time next year.....

Aide:  Hopefully sir, but we need a quote for today.

Romney:  I don't know...  What do people who work for a living like to hear?

Romney:  WHAT?!  I hate those laws!  Do you have any idea how far we could drive down labor costs if we could make kids work?  Look at the profits we reap in factories overseas!!

Aide:  You would want your grandchildren to work in factories sir??

Romney: Not MY grandchildren you moron!

Romney:  Get sick on your own time.

Aide:  How about we just speak to the idea of Americans being good, hard workers.  Then we don't have to mention the Labor movement at all.

Romney:  Now, you're thinkin kid!  But we need to work in an insult to the guy sitting in my chair presently; a line about Americans being out of work.

Aide: But won't that remind people that those jobs were lost under President Bush?

Romney:  Speak his name near me again, and you will be joining the little people who are out there looking for jobs.

Aide:  Sorry sir.  Here, I just posted this on Facebook.  What do you think?

Romney:  Perfect kid.  Keep this up and we might even get you some health care coverage.