Bill Maher Needs to Preach at YOUR Church This Sunday 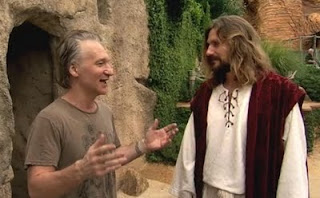 Dear Priest, Bishop, Pastor - Whatever sermon you had planned for this Sunday, just tuck it away for next week. Christianity will function so much better if every congregant hears Bill Maher's latest commentary from the pulpit Sunday morning.

If you don't know Bill Maher, he is a comedian, commentator, and staunch Atheist. In this commentary he brilliantly sums up the reason Western Christianity doesn't work.
_________

New rule: if you’re a Christian who supports killing your enemies and torture, you have to come up with a new name for yourself.

Last week, as I was explaining why I didn’t feel at all guilty about Osama’s targeted assassination, I made some jokes about Christian hypocrisy and since then strangers have been coming up to me and forcing me to have the same conversation.

So let me explain two things. One, I’m not Matthew McConaughey. He surfs a long board. And two, capping thine enemy is not exactly what Jesus would do. It’s what Suge Knight would do.

For almost 2,000 years, Christians have been lawyering the Bible to try and figure out how “love thy neighbor” can mean “hate thy neighbor” and how “turn the other cheek” can mean “screw you I’m buying space lasers.”

Martin Luther King gets to call himself a Christian because he actually practiced loving his enemies.

And Gandhi was so fucking Christian he was Hindu.

But if you rejoice in revenge, torture and war – hey, that’s why they call it the weekend – you cannot say you’re a follower of the guy who explicitly said, “love your enemies” and “do good to those who hate you.” The next line isn’t “and if that doesn’t work, send a titanium fanged dog to rip his nuts off.”

Jesus lays on that hippie stuff pretty thick. He has lines like, “do not repay evil with evil,” and “do not take revenge on someone who wrongs you.” Really. It’s in that book you hold up when you scream at gay people.

And not to put too fine a point on it, but nonviolence was kind of Jesus’ trademark. Kind of his big thing. To not follow that part of it is like joining Greenpeace and hating whales.

It’s just ignoring if you’re for torture – as are more evangelical Christians than any other religion. You’re supposed to look at that figure of Christ on the cross and think, “how could a man suffer like that and forgive?” Not, “Romans are pussies, he still has his eyes.”

If you go to a baptism and hold the baby under until he starts talking, you’re missing the message. Like, apparently, our president, who says he gets scripture on his Blackberry first thing every morning, but who said on 60 Minutes that anyone who would question that Bin Laden didn’t deserve an assassination should, “have their head examined.”

To which I say, “hallelujah,” because my favorite new government program is surprising violent religious zealots in the middle of the night and shooting them in the face. Sorry Head Start, you’re number 2 now.

But I can say that because I’m a non-Christian.

Christians, I know, I’m sorry, I know you hate this and you want to square this circle, but you can’t.

I’m not even judging you, I’m just saying logically if you ignore every single thing Jesus commanded you to do, you’re not a Christian – you’re just auditing.

And if you believe the Earth was given to you to kick ass on while gloating, you’re not really a Christian – you’re a Texan.
__________

Let's face it, pretty much everyone outside of Christian circles thinks Christians are ass-hats. I think most Christians are ass-hats, and I am one of them (sort-of, kind-of, maybe). Why is that? I think it is because of what Bill hits on here. If we lived these core teachings, we would really be Christian. However, we have turned Christianity into a club where I am in and you are out. Instead of spreading Jesus' teachings - that the Kingdom of God means you love your enemy and bless those who curse you - we encourage people to join our church or get them to do an "accept Jesus" prayer.  Then, with our blessed assurance in tow, we go on to live just as self-absorbed as our darkest corners dictate.

I have been going to church my whole life, but I can count on one hand the amount of times I have heard addressed from the pulpit what Bill talks about here. However, I have lost count of how many messages I have heard about tithing. :)

Gandhi was so fucking Christian he was Hindu.

Heh! Best quote of the year so far!

Some good commentary and push-back on this article here and here.

fantastic! i couldn't believe i was in the minority among Christians on this topic.

Great post. Bill is right, most Christians are just fans. They just do it to 'be in the club'.

Wow! This guy is hilarious! Thanks for sharing. I loved the Ghandi quote too...

July 17th I'll be preaching to over 1,000 people about loving our enemies. I'll send you the link when it goes up and you can add one more sermon to your list of times you've heard that message.

Before long you may even need two hands to count the list, ha!

Maher and I could hang out and enjoy the conversation, I think. If he could get over me being a Texan AND and Christian.

If this were delivered as a homily or sermon, it wouldn't be the f-word causing the most offense and agitation.

I agree that the Gandhi quote is the best quote of the year! That had me laughing so hard I couldn't breathe.

One of the biggest reasons I disliked Christianity was that too often Jesus' command to love your enemies was just ignored, and I could not ignore it.

Don't get me wrong, I'm no where close to being able to perfectly love all my enemies. Heck, I can't even perfectly love my family all the time. It's not an easy task and even if I live another 100 years, I won't have perfected it. But I believe that loving one another is our purpose in life and I plan to pursue that goal as best as I can.

I could not bring myself to remain a member of a religion where so much focus was put on who is in and who is out. I don't think God cares, so why should I?