Our need to be better than someone else 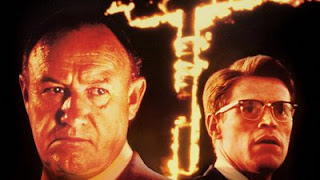 Mississippi Burning is a movie based on the true story of two FBI agents investigating the disappearance of 3 civil rights workers back in the 60's. William DaFoe's character is a by-the-book agent who was raised in the North. Gene Hackman's character was raised in the South and understands the mindset. Because of their investigations, the locals became agitated and began a campaign of violence and intimidation against the black population. The two agents have this discussion later at their hotel:

[DaFoe] Where does it come from, all this hatred?

[Hackman] You know, when I was a little boy... ...there was an old Negro farmer lived down the road from us, name of Monroe. And he was... Well, I guess he was just a little luckier than my daddy was. He bought himself a mule. That was a big deal around that town. My daddy hated that mule. His friends kidded him that they saw Monroe ploughin' with his new mule... ...and Monroe was gonna rent another field now that he had a mule.

One morning that mule just showed up dead. They poisoned the water. After that there was never any mention about that mule around my daddy. One time we were drivin' past Monroe's place and we saw it was empty. He'd just packed up and left, I guess. Gone up North or somethin'.

I looked over at my daddy's face... ...and I knew he'd done it. And he saw that I knew. He was ashamed. I guess he was ashamed. He looked at me and he said..."If you ain't better than a nigger, son, who are you better than?"

[DaFoe] Do you think that's an excuse?

[Hackman] No, it's not an excuse. It's just a story about my daddy.

[DaFoe] Where does that leave you?

[Hackman] With an old man who was so full of hate... ...that he didn't know that bein' poor was what was killin' him.

This scene reminds me of a pastor I once heard. He was marching back and forth across the pulpit, talking about the corruption and decadence of other religions. He stated that even if these religions seem to be doing good, it isn't true... they are tools of Satan! He finished his diatribe by shouting, "The WORST Christian is still better than Gandhi!!" The crowd erupted into applause and amens.

Somehow I can picture this Pastor, or one of his congregants, sitting by their child's bedside stating:

When we think like this, we show our poverty.

Great movie and a superb application.

Those are the Christians I was writing about...