Winning And Losing On Chick-fil-A Day 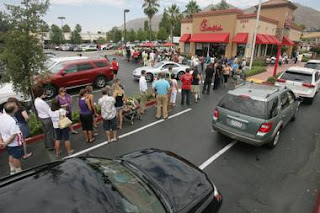 I read a blog on August 2nd that made me think the whole Chick-fil-a event on August 1st was perhaps bigger than I suspected. Lots of people have stated that this happening was a mere flash in the pan. Though it had a lot of energy, it boiled down to a day where liberals and conservatives flip each other off... and then everything would go back to normal.

I don't think it will... go back to normal, that is. I think a bigger shift happened on August 1st than any of us realize.

A few months back, I was having breakfast with an LDS friend of mine, and he started asking me about what had lead me away from a life of faith. I told him about questions and concerns with which I had wrestled. I told him about things I learned. But there was one story that stood out. As I heard myself telling the story, I realized how pivotal it was. Before the notion solidified in my mind, my friend said "All those other things mattered, but it was that event that tipped the balance, wasn't it?"

I continued to go through the motions of religion for a while, but it was over. All the words, all the practices, all the people with their faithful confessions ... it was hollow now.

On August 2nd, I read a blog by Rachel Held Evans that reminded me of that event. Rachel is an author and speaker of some renown in the Christian community and one whom I respect. August 1st affected her. She said:

"Is this what following Jesus is supposed to be about? ...Is this what mobilizes the people of God?

Suddenly, my religion is alien to me—small, petty, reactive. My faith has lost its bearings. I don’t feel like praying anymore, not even for the mom who begged me to pray for her gay son who vowed yesterday never to return to church again.

Can I blame him? Perhaps it is better if he stays away."

I recognize these sentiments. When you realize that your friends outside the faith are probably going to be healthier and happier if they stay that way.... you are entering the first stages of your faith shutting down.

On August 1st, scores of Christians poured in to Chick-fil-A to give their collective middle finger to all the liberals and homosexuals who irk them so. They could have taken the path of Jesus... but it felt sooo much better to stick it to the opposition.

In doing so, they embarrassed many of their brothers and sisters in the Faith. Fellow believers watched the television, read the tweets, followed the news feeds... and they were ashamed.

It may be a few years before we start to see the real toll of August 1st, but I suspect it will be large. People will return to their churches tomorrow, but for many it won't be the same. Sermons on the "Love of God" won't stir them like it did before. The songs won't seem so sacred. The faithful confessions of fellow congregants will sound vapid.

No more will they invite friends into their faith; instead they will want to protect them from it.

I believe in the years to come, many atheists and agnostics will look back and realize August 1, 2012 was a tipping point. It was then that their life began its shift out of faith.

The best article I have read on this subject. Thank you.

I think you hit the nail on the head here. I've read a few news stories which say that millennials are leaving their churches because they are sick of the politics and culture war battles. Gay marriage plays a huge role in this because most millennials are fine with LGBT people having the same marriage rights as heterosexuals.

My own tipping point came when the bishops had letters read in every parrish regarding the HHS mandate. My heart went dead, and I realized I was embarrassed by my Catholicism. Sure, I already believed in universalism and disagreed with the church in other areas, but that was the incident that made me not want to never return to church.

I was certainly ashamed and while it wasn't the main thing that tipped me, this is the first time I have looked at the people I once shared beliefs with and been embarrassed by them and for them.

Excellent post sir! If I hadn't decided that the church was no longer for me some six years ago, I, too, could see this as the "tipping event"

God forbid if this day of Chik-fil-a was the tipping point on my beliefs! Dear God, what does that say if a bunch of extremists going into a Chik-fil-a is what tipped my beliefs?? I can see if I say, moved to Utah, and became exposed to another belief system and became ashamed of my own because of that, but I would NEVER change my belief system because of what happened that day in August. I can completely respect other people believing other things than I do, but I DO not change my beliefs because of the craziness of that day that had NOTHING to do with what my JESUS taught me about loving people and loving others. Goodness, no!