"How did this happen? Who's to blame? ...if you're looking for the guilty, you need only look into a mirror." ~ V

I was listening to one of our state senators recently, bemoaning our "broken" educational system.  Broken, as if there were some faulty piece in the machinery... and if we could just replace it, or screw it in tighter, the educational machine of our nation would merrily hum along.

That is how we have been approaching education for the past 30 years. We try to "fix" "broken" facilities, or tax structures, or curriculum.  For the past decade, we have been trying to "fix" broken teachers.  As an educator, let me tell you that that process has been a barrel of fun.

All of this has been an adventure in avoiding the obvious. We see ourselves trailing behind other nations of the world and we are ever looking for someone to blame. However, like a poor marksman, we keep missing the target.  The missing piece is there for all to see. Let me show it to you: 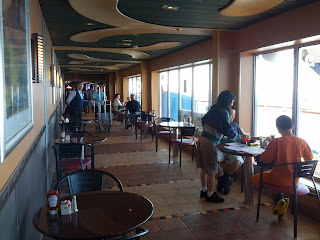 What you are looking at is the hallway from the pool deck to one of the dining areas of the Carnival ship Inspiration.  I acted like I was getting a picture of the hallway, but I really wanted a picture of this family.  Each morning, these parents sat with their son at the table, while he worked on what appeared to be Calculus problems.  Here we are, on a cruise ship dedicated to glorious hedonism, and this kid is taking time out every day to study.

Did I mention this was an Asian family?  Are you surprised?

We hosted two Asian students for a few weeks over the summer. They were great kids.  One thing I noticed about them was that, amidst their busy schedule with their group, they took time out each day to study.

I live in the southern end of the Salt Lake Valley. Outside of Utah Valley, we are probably one of the whitest areas of the country.  Yet if I go over to the local academic enrichment businesses such as Kumon, the vast majority of their clients are Asian or Indian.

What are all the other American kids up to around here? They are mostly in soccer or football, some are in dance or music, others are just hanging with friends.

Now I don't see anything wrong with what the majority of our American kids are up to... but at some point we have to acknowledge the different ways in which cultures invest their time and money.

Typical American culture puts a lot of time and money into sports and entertainment. We regularly see American parents grooming their kids to be athletes, musicians, or beauty contestants; but we rarely see such grooming investment going toward making them scientists, linguists, or mathematicians.

I recently saw this graphic on Facebook. It shows the highest publicly paid position in each state. Notice what dominates: 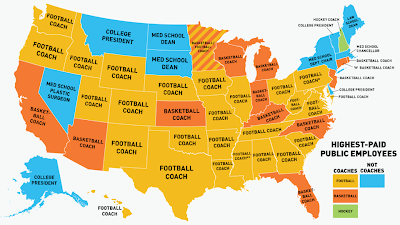 If you want to know what is really important to someone, regardless of their declarations, look at where they spend their time and their money.

In the movie The Matrix, the character Cypher wants to be put back into the Matrix with no memory of who he was.  Instead, he says:

Cypher summed up the heartbeat of our culture. We do not honor and invest in those who heal us, who move us forward scientifically, who advance us intellectually. No, those we make most rich and important are those who entertain us.

Our education system is not broken.  It is a reflection of our culture. We can try any myriad of ways to "fix" it, but if you don't like what you see in a mirror, no amount of mirror adjustments will change the reality.

Now, I don't necessarily WANT those other cultures either. Do I really want to go on a cruise and spend my time doing calculus? Do I want to be visiting another country and stay inside studying? Not at all. I think America just needs to be more honest with why we are where we are. If you want to be better than someone at something, you usually have to be willing to commit more time and money to that thing than they are.

I remember, back in an economics class in college, seeing a documentary about KFC coming to Japan. The amount of training the Japanese received to cook chicken and run the register was simply bizarre. It was weeks and weeks of class work, where each training session started with the new employees in full KFC uniforms standing and saying a pledge to KFC in unison. This was in the 1980s, when Japanese auto companies were kicking America's hind-quarters, and I remember thinking, "If that is what it takes to be first... I'll be a happy second".

Sometimes being first at something isn't worth the investment. It takes a single mindedness and dedication that may not be worthy of the loss of time required. We are only here for a brief span.

America is a leisure culture that values entertainment.... perhaps we need to own that.

I have had Amazon Prime now for a couple of years.  I originally got their 30 day free trial near Christmas so that I could do all of my Christmas shopping and gift giving with free shipping.  My intent was to ditch it after the free trial period was over.

However, I have to say that I got really spoiled with two day "no cost" shipping.  Yes, I pay the annual 79 dollar fee, but I know I would do more than that in normal shipping.  In addition, now that my shipping is covered, I find myself going to Amazon more.  Why bother running out to the store to pick up item X when Amazon can have it to me in two days...  all those little trips out prevented, add up.

I know you get the Amazon version of Netflix included... but since I have Netflix, I rarely use it.  You also get the Kindle library... but since I have never had a Kindle, this was moot.  However, I am getting my first Kindle next week... so I'll update with how that goes.

For me, it is mostly about the shipping... easy ordering, no going to crowded stores.  Presents shipped directly to recipients.  Classroom stuff sent right to my school.  Easy!

So, if you have not done Amazon Prime before, at least do yourself the favor of getting it free for 30 days with Christmas around the corner... but don't be surprised if you keep it.

There are some bands who get less rotation in your playlists as the years go on. What appeals to you in your teens and twenties often does not hold as you move in to mid-life.  I have built up a prodigious music collection over the years, most of it acquired during those said teens and twenties. However, the majority of those CDs have not been spun in over a decade. Add to that, my shift out of faith has rendered much of my collection non-palatable. Next summer I intend to send many of those CDs out to pasture via Ebay.

Still, there are a few bands who have had the depth and elasticity to journey through my varied changes in age and mind. While others lie dormant, they still get regular play.

Jars of Clay is one of those bands. I have seen them twice in the past two years and I enjoy them more now, even though we sit on opposite ends of the faith divide. Their music remains engaging, while their lyrics are as clever and poetic as ever.

Jars latest recording - Inland - is one of my favorites and I could not recommend it more. If you want to give it a listen, you can hear the entire recording at Billboard magazine here.

I spend a lot of time lately listening to various people's religious journeys. Once you step outside your own religious circle, where you believed in only one true path, you meet people with tales of different paths, each with its own nuance. I have my own to tell, but regardless of which one is told it becomes apparent that they are all simply different flavors of the same human mechanism.

I was part of a conversation on Facebook recently where a number of Christians were in a debate over a particular theological point and practice. One of the conversants became concerned about the disagreement occurring within the conversation and moved the entirety of the group to a private chat, stating -


"I simply can't imagine the damage that may have been done if any non-believer read those posts."

I have heard her concern expressed in varied ways about different circumstances over the years. Regardless of the topic at hand, the underlying motivation is the same. Religion is about control. The need to control the conversation, control the message, control the delivery. Religion treats everyone as children who must be corralled. Be it Mormons, Jehovah's Witness, Catholics, Muslims, or Evangelicals; the same thread is there. To quote Joss Whedon's character, River -


"We tell them what to do, what to think - don't run, don't walk. We're in their homes and in their heads and we haven't the right. We're meddlesome."