I am down in Albuquerque at the Emergent conference. I am doing this from my phone.... which is tedious. The speakers are challenging and the conversation at my table has been enlightening. I hope this becomes an annual event.

Quotes from articles I read this week #3

what i really need is a dose of demotivation. a swig of selflessness. a message about how to give up the chase for significance and instead embrace the beauty of obscurity.
i need to be demotivated about accomplishment. and instead be motivated about the unspectacular grandness of the ordinary life lived and breathed in the common days of here and the long, restless nights of now.
How God Messed up My Religion

On a related note, I am excited about the youtube clip going around of some famous guy on Conan O’Brien’s show ranting about the whineyness (or joylessness) of our wealthy culture. I see this all the time during remodel jobs for wealthier people. People can always find some ridiculous little nuance to be unhappy about. Meanwhile, we installed a laminate floor for an elderly woman who seems to live pretty simple and she was the easiest human to work for. Have lots = bitching & whining. Have little = thankful for everything. Go figure.
The Agent B Files

I've read the words of Jesus hundreds of times. And what keeps driving through my brain is this:

Treat each other well. Live according to your highest principles. Trust each other and trust God. Listen to your heart.

I can get that, even when the theological debates excite and confuse me.
Megaloi

During a group discussion at the end of the day, a question arose concerning the pressure we often feel (be it illusory or otherwise) with regards to making sure the children are “learning the right things”. I suppose you could call it a trust issue. Letting a child hear a story from the Bible and giving them the space and means to reflect on it is something we are not inclined to do. My instinct is to tell them what I think the moral, the climax, the conflict, or resolution of the story is in my expert (somebody gag me) opinion. Simply telling them the story and getting out of the way isn’t the model I was given growing up in church. This may be one of the reasons I had little trust in my own ability to make good decisions as I got older. These days, however, I think of the church and children’s Sunday school as a place for discernment rehearsal. It is all we really do when we say we “study” the bible. We are grasping at the wonders and complexities (the mystery) of the bible as a healthy part of our psychological development. Maybe you are already there, but I was struck afresh with the enormity of leading a class full of children through the beginning stages of their spiritual journeys. I want to encourage them to trust their already-holy spirits that have them discerning (and sometimes saying) all manner of amazing things week after week.
Peer Pressure is Forever

To go along with that-is evangelical Christianity in danger? The only real thought that occurred to me here is that this is what happens you spend your resources preaching to the choir.
The New Unitarian Universalist

If public witness mean a fish on the back of your car and wearing an abstinence ring, you might be an Evangelical.

When someone mentions a “sinful lifestyle”, if you automatically think of the sins of drinking, drugs, smoking and sexual impurity, rather than the sins of anger, pride, deceit and the failure to love your neighbor, you might be an evangelical.

If you disparage the Mormons and Mother Teresa for emphasizing good, moral behavior, you might be an evangelical.

If you’ve never read an actual postmodernist author, but know postmodernism is evil because John MacArthur said they don’t believe in truth, you might be an evangelical.

If the words “worship” and “singing” are synonymous in your vocabulary, you might be an Evangelical.
Parchment and Pen

Did Jesus avoid the world? I don’t see how we could possibly construe his actions as anything but rubbing shoulders with people who didn’t even know how much they needed him. And I’ve said it many times before, but his harshest words were for those who thought they were doing God favors!
Theological Musings 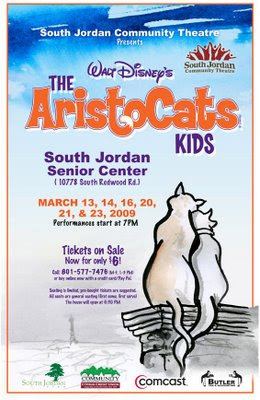 My son and daughter will be in a production of the Aristocats starting next week with the South Jordan Community Theater. Kathryn is the mother cat, Duchess. Jake is part of the dog troop. This is Kathryn's 4th production with the company; Jake is hitting the stage for the first time.

It has been fun for me to watch both my kids so excited and involved in something together. In fact, Jake demonstrated his seriousness about the production. Last week, the director mentioned that the dogs needed to keep their bangs under their hat, or cut their bangs. Jake seemed to only grasp the second part. He didn't believe my wife when she told him keeping his bangs under his hat was enough; so he snuck upstairs and quietly took care of his bangs with scissors.

Utah Legislature and the LDS Church 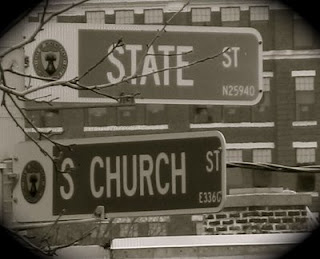 I live in Utah. Living in Utah means you get to hear A LOT about the Mormon/LDS church. This can annoy a lot of non-LDS folks (and some LDS too). Because of this, I think the LDS get a a lot of undeserved criticism. To some, no matter what the LDS church does, it is wrong.

Not that occasions don't exist when criticism is deserved. An article I read in the Salt Lake Tribune today demonstrated one of those occasions.

Utah has some "quirky" liquor laws. Most prominent among these is a requirement that you be a member of whatever bar at which you would like to order a drink. Just walking into a pub and showing your ID is not sufficient. You have to become a member. It is not overly intrusive, but it is very tedious. Utahns who want to defend these laws often point out that there are other states that have a quirky liquor law or two. I have never considered it a good reason to continue a bad practice simply because someone else also participates in a bad practice.

The Utah legislature is in session right now and one of the items they are considering (thanks to the prompting of our governor) is a removal of the pub membership requirement. There was a meeting about it this week and according to today's Salt Lake Tribune:

Representatives of the House, the Senate, bar owners, restaurants, the governor's office and the LDS Church hammered out the framework during intense closed-door negotiations this week.

Now the teacher in me wants to put forth a multiple choice question.

Class, which group above does not fit in the context of the set? Is it:

A. Representatives of the House

E. Representatives from the Governor's Office

Ding-Ding! Time's up, pencils down! If you answered F, you are correct!!

What business does the LDS church have in these meetings? I am particularly interested in the opinions of non-Utahns. I may not recall correctly, but I do not seem to remember officials of the Catholic church being involved in meetings like these back in Michigan. In fact, I would venture a guess that it does not happen in any other state (though Southern states may give a couple seats to a Televangelist or two). :)

I know that the typical defensive response here in Utah is that since the LDS church is so large here, they have a vested interest in decisions like these (Mormons don't even drink). I don't buy this. The vast majority of our state legislature is already Mormon due to their large percentage. The LDS church has voice through its elected representatives... just like everyone else. Injecting themselves at this level is simply inappropriate.

I have lost count of how many times I have read the Watchmen Graphic Novel. If you have never read Watchmen, it is considered by most to be the best graphic novel of all time. I would agree with that assessment.

This Friday, the Watchmen movie is being released. I am looking forward to it, but I know that it will probably fall short in many respects. How does one capture a 12 issue epic in a two and a half hour movie?

With that in mind, I was delighted to see that a "motion comic" was created. Basically, they took the comic frame by frame and animated it with voice-overs and music. I am on the third episode, and I love the work they did. In the end, I would not be surprised to see it beat out this Friday's movie.