Responses to Leaving the Faith


A few weeks ago, Ojo Taylor invited me to write a post for his blog (head over and check it out). I have been a fan of Ojo's work for a long time, literally since I was a kid, so I was glad for the opportunity.

I was probably about 15 when I first saw Ojo with the band, Undercover. I had recently been "saved", though I had been attending a Christian school for years and had grown up in church. Undercover had a humble, yet "in your face" punk rock style that appealed to a Christian 15 year old with a rebellious religious streak. My friends and I used to get in trouble at our Christian high school for going to see bands like Undercover. I remember being sent to the office and enduring a lecture by one administrator because my friends and I had spent the weekend at the Christian music festival Ichthus (this administrator, unbeknownst to me at the time, was having sex with girls at the school).

Undercover's change in lyrical content over the years often reflected what was happening in my perspective of life and faith. The writers of "Jesus Girl" and "God Rules" took on a new tone that kept me listening into my twenties and beyond.

A few years ago, I read an interview with Ojo where he was talking about the questions he had in regard to his faith - and how little his faith was holding up to the process.  I related entirely. Now in 2012, we both stand outside the Christian religion.

The 15 year old me would be utterly repulsed at what has become of my faith - but he probably couldn't help but air guitar at the thought that I got to write for Ojo Taylor.

(You can find a great talk that Ojo gave at the Freedom from Religion Foundation convention here.)

You Didn't See Anything

In the above video, you get some varied opinions about homosexuality by Christian Evangelicals.  Interestingly enough, they seem to vary along generational lines - the younger, the more accepting.

Greg Boyd brought up the Barna poll which shows that the number one item both Christians and non-Christians associate Christians with is an anti-gay stance.  Chuck Colson, feeling that Greg and Shane were giving away the farm, denied  anti-gay sentiments among Christians.  He says, "I have yet to hear a Christian bash a homosexual."

This is, to me, a rather incredulous statement.  I can't began to count the snide, condescending, hurtful, and judgmental comments I have heard Christians make about homosexuals to their faces and behind their backs.  I just read one this morning.  A friend of mine was being lectured by a Christian, using all of the usual arguments (eg. God made Adam and Eve not Adam and Steve).  The parting remark was "Gays make me sick".

So, how is it that Chuck never hears any of this?  It seems to me that one of two things must be happening.  He is either so defensive of Christianity that he interprets reality to suit his prejudices (he really doesn't see it), or his bar for what is considered "bashing" is really, really low.

In any case, he is a leader in the Christian community, and it is statements and perspectives like his that give permission to Christians all over the world to hold and perpetuate prejudiced and bigoted dialogue.

I know Christians who are quick to point out that "not all Christians are like that", but at some point, Christians have to start taking responsibility for their community. Obviously, there is something in the ethos that allows so much of this to fester. You don't find people who are ambivalent about ecology in Greenpeace... why do we find so many people ambivalent and hostile to love in Christianity?

Jesus Of The Fineprint

I do not think the fineprint Jesus is the Jesus most people attending church want, but he is the medieval carryover they feel compelled to accept.

This excellent cartoon was created by David Hayward a.k.a. the NakedPastor. 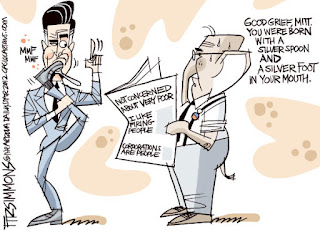 Romney's Mormonism Not A Problem 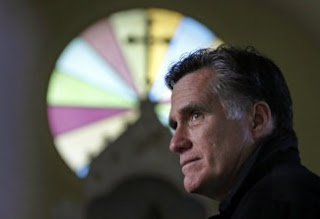 I have read a few blogs and articles lately that are conjecturing about how much Romney's Mormonism is going to be a problem once the primaries are over.  They believe Evangelicals (whom he would need to carry) are going to be tepid in their support for him at best.  Bill Maher has been stating that once folks start Googling Mormonism, it will be all over for Romney.

I hope no one is counting on this, because I just don't see it happening.  First, none of the GOP candidates have really gone there.  If his Mormonism has been of no real issue in the primaries, why would anyone suspect it will be an issue once he secures the nomination?  Democrats may decry religious conservatism in general, but I don't think we will ever see them going after Mitt's Mormonism.

Second, no one outside of Evangelicalism (and fundamental Baptists) cares that Mitt is a Mormon.  It is just another religion among many.  If Mitt does not make it an issue, I do not believe it will be an issue to most Americans.

Third, conservative Evangelicals ultimately won't care because... well... religion was moved to the sidebar in their worldview quite a while ago.  So long as Mitt talks about free markets and values, mentions the Constitution and our Founding Fathers, and gives the occasional hat-tip to "God" while promoting a strong military, they will be more than satisfied. If you don't think conservative Evangelicals have moved a political worldview to the forefront of what drives them - just listen to their rhetoric.  Honestly,  I get shocked on a regular basis by what conservative Evangelicals say.  I want to interrupt, "You do know you claim to follow Jesus... right??"  There is a blog I subscribe to where the author takes pictures of Jesus and puts statements made by his followers in bubble quotes as if coming from him.  It is rather fascinating to see Jesus calling for public executions.

So no... in the end, I think Romney's faith will be of little account in the coming election. There may be a "few" evangelicals who stay home rather than vote for a Mormon; but those numbers will be matched by Democrats who stay home because they will not vote for anyone but a liberal.