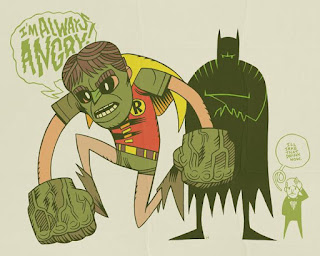 Poor DC... They must be having movie envy. Seriously... if they didn't have Batman, they would have nothing... and Batman ends this summer. Green Lantern was a fizzle at best. For such a deep universe, they are having trouble moving their titles to the big screen. If Superman tanks next year, they might as well pack up shop.

Marvel on the other hand seems to have the big screen transition down to a science (we will ignore Punisher, Ghost Rider, and Fantastic Four). Let's see, in the past few years we have seen good renditions of Spider-man, Captain America, Thor, Blade, Hulk, X-men, and Iron Man... I even thought the Director's Cut of Daredevil was decent. In addition, last summer's X-men First Class and this summer's Avengers pushed the bar even higher as to what we can expect in a great superhero movie.

I think part of DC's problem is that they have become too Batman/Superman dependent. They have a decent bench, but can't seem to see past their star players. I think Marvel has shown that if you do a good story, you can overcome a little lack in name recognition. I can't begin to count the number of people to whom I had to explain who Iron Man was prior to the movie opening in 2008. Now there is hardly a person on the planet who couldn't tell you who Iron Man is.

So what do you think? Who does DC need to put in the spotlight? Who is next for Marvel?

Truth Does Not Demand Belief 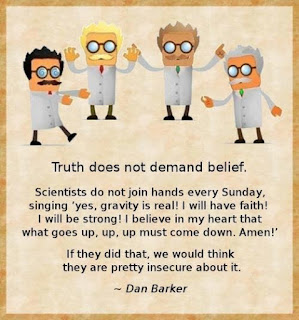 I saw this one on Facebook and it made me chuckle.  One of the things I have noticed since moving beyond my Christian faith is that I don't spend time with all of the word games.  These word games require you to say things, almost mantra like, that keep you focused and believing in an unseen reality.

For example, as a Christian, you might spend a lot of time referencing God as if you had just spoken to him on the phone - "I was wondering which job I was going to go for, and God made it clear to me that he wanted me in the first one."  Now if this Christian ends up at the second one, that is ok... all of the verbiage will roll down a new track.  Being wrong on what "God made clear" never impacts the next time God makes something clear.

All of this alternate reality creation requires a lot of effort and concentration of the Christian's part.  You take normal everyday occurrences, and turn them into "God Moments" (moments when God does something really cool that you can then share as a faith building story later).  With all of this energy being spent on warping reality, you have little time or patience for people in your life who would question these realities.

But these "God Moments" really are just everyday occurrences.  For example, I just got a new job.  I had done a few other interviews but, though I would have been happy to have gotten any of them, none of them had grabbed me like the last one did.  My wife could hear in the way I told her about the interview that I really, really wanted this one.  Lo and behold, I got the job.

In my Christian days, I would have been able to relate a half dozen items that would have demonstrated that my getting this job "was a God thing".  The reason I didn't get the other jobs is because God didn't want me there... and he was making this clear in my heart, which is why I was not as excited about them.  God was present in my interview and gave me favor with the staff who interviewed me.  The peace and anticipation I felt during and after the interview was God showing me his hand in this process.

That's how I would have interpreted and retold it in the past.

What is the reality?  The reality is I have a great resume', great experience, and great references.  I interview well.  It was clear to the staff and to me throughout the interview that this was a good fit.  I liked what I was hearing from them in the interview.  The good feeling was a reciprocal response generated by both parties anticipating a successful choice.

A God Moment?  or an Everyday Occurrence?  The first option requires a lot of word games and energy to believe... the other is just plain and simple truth that does not need to be propped up. 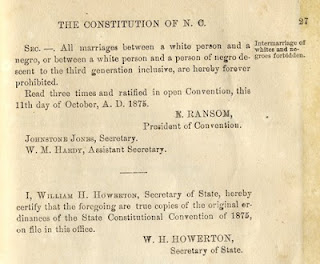 "Those who don't know history are destined to repeat it." ~ Edmund Burke

This axiom is true... as the picture, and North Carolina's vote yesterday on Amendment One, demonstrates.

I heard one young man interviewed yesterday who said, "I voted for Amendment One because it reflects my conservative values."

Hmmmm... conservative values... these are the same folks who go on ad nauseum about how everything done by government is bad, and therefore always trumpet the virtues of small government.  However, this vote makes clear that when it suits their purposes (which in this case is the control of the lives of others) they will thank you kindly for a double serving of that big, bad ol' government. 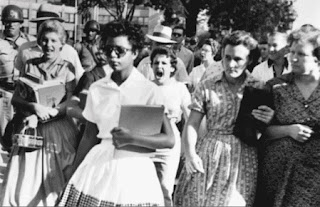 I know I used this picture yesterday, but I am fascinated by it because it says so much. In it, a crowd of white folks are protesting this girl for attending the local school.  The National Guard had to walk the student to school to protect her.

In the same way, I am sure the folks who voted for Amendment One in North Carolina would never self-identify as bigots.  They probably think of themselves as moral, upstanding, God-loving folk; who are only looking to protect their children and their families.

But history will also, rightly, remember them as bigots.

WHO we persecute and relegate to 2nd tier status in our society may change... but the attitudes and rhetoric that drive the persecution remain the same. If you read about the Little Rock Nine, you will find that the arguments used against bringing African-Americans into equal educational status sound strikingly similar to arguments made by people wanting to deny homosexuals equal marital status.

Look at the contempt on those women's faces for that student.

Anyone want to take a guess where those women were Sunday morning?

The net is all a dither with the latest rants by Dan Savage and Pastor Sean Harris. I wrote about Dan Savage last week. Although many Christians didn't like his tone or what he said, I have yet to hear an argument refuting his assertions. Let's face it, the writers of the Bible felt no need to have listed in the 10 commandments "Thou shalt not own another human being!" Paul did not tell Christians to free their slaves... just treat them nicely. Clearly, most of the writers of the bible had no problem with slavery - yet there were Christians taking offense at the bible being referred to as a "pro-slavery document".  To me, these offended parties were having an emotional reaction that had no objective reason.

Now there is Pastor Harris of a NC megachurch church who, amongst other things, said "Dads, the second you see your son dropping the limp wrist, you walk over there and crack that wrist. Man up. Give him a good punch." So gay kids don't need to merely fear rejection from Christian parents, they are now being threatened with beatings as well. To be fair though, Pastor Harris could be thought of as a religious progressive. After all, the bible (infallible, God's revealed truth, without error) has told us that the child should be put to death. Pastor Harris is being darn near liberal by comparison.

So why are Christians not putting homosexuals to death? Because Dan Savage was right; Christians ignore bible passages ALL THE TIME.  Christians have a bit of a sliding scale when it comes to biblical obedience. Death would be a little drastic for modern society, so we move the scale down to serious societal oppression. When it comes to adultery (also deserving of death a few verses up), we slide the scale even further down. In fact many items (eating shellfish, wearing mixed fabrics, no work on the Sabbath) get moved off the sliding scale all together.

Many Christians want to distance themselves from a Pastor like Harris, but in their practical attitudes and rhetoric, there is little difference. Harris may be a hardcore blatant oppressor, but many Christians are softcore - carefully censoring their words, but maintaining a similar attitude in their hearts. Then they wonder in befuddlement why Christianity is becoming more marginalized and youth are leaving churches in droves.

Which brings me to my Shellfish Challenge. Many new ideas and approaches need to be "tried on for size" before they can be accepted. So, my Christian friends, I challenge you for one year to let go of the homosexual issue. Give it the same attention, worry, concern, and time that you give to the biblical avoidance of shellfish... nothing. No conversations, no sermons, no readings, no political efforts, no wisecracks. In short, you put into the issue the same thought and effort Jesus did... nothing.

Take the challenge for 1 year... then weigh what effect it had on your soul and your relationships.

and.... if you still feel the need to be against something - shellfish is an open field. Remember "God Hates Lobster!" :) 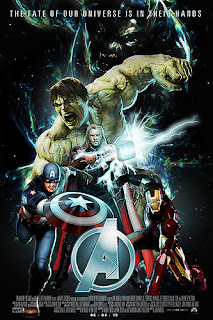 I usually don't like to pre-hype a movie. It seems like high expectations have ruined many a "perfectly good" film. However, for the Avengers I let my usual determination to remain neutral drop away. Once I saw that Joss Whedon was the director and the writer, I let all hesitation go in total faith... In Joss I trust.

My son and I just got back from the Cinemark. We have been counting down the days for quite a while now.  We grabbed dinner beforehand at Wingers, then walked over to the show. Multiple times throughout the movie, Jacob leaned over and said "Dad, this is the greatest movie ever!"

And it was incredible. I knew from Serenity that Whedon was particularly suited for writing a story about the adventures of a team. One would think that with so many characters, the story couldn't help but feel scattered. Not at all.

I would have loved to have spent more time with the famous Whedon dialogue, but there was plenty of it amidst the eye candy. I think we can expect more in that department in Avengers 2... in a way, this was an origin story and there will be less need for backdrop next round.

When Iron Man first came out years ago, was anyone expecting this level of movie franchising and interconnectedness  to occur? I hope they have a master plan to bring it to a decided and worthy conclusion.