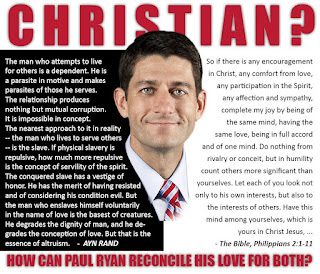 I saw this picture on Facebook today.  I don't know too much about Ryan yet (other than he seems to be a darling of the Tea Party crowd), so his picture here is superfluous to me.

However, these two statements (if you haven't read them, read them first) are very telling.  Much of the Religious Right fervor presently sounds more like the text of Ayan Rand than St. Paul.  If I were asked which rulebook is the Religious Right following, I would have to say it is that of Rand.  The rhetoric of Fox and AM talk radio and a lot of what I see coming from the Right on Facebook is antithetical to Paul. I would venture to guess that Ayan Rand would feel perfectly comfortable listening to the stump speeches from the Right...  I think St. Paul would feel like an outsider.

I am curious how many scriptural edicts you can politically oppose before it occurs to you that you have moved to the outside of your religion.

It is interesting that so many right wing Republicans, devout Christians they are, love Ayn Rand, the atheist.

Have you ever read Rand's classic work, Atlas Shrugged? I tried and tried to read it...and finally gave up. I guess my liberal mind couldn't grasp Rand's deeper truths. :)

IMO, Ryan is Romney's Sarah Palin, a bone to the far right of the Republican Party. The only difference between Ryan and Palin is that Ryan has a brain. I can't wait to see how Romney embraces Ryan while distancing himself from Ryan's draconian views on Medicare and Social Security.

I'm no conservative by any stretch of the imagination. My experience with Ayn Rand and conservatives is that the more educated/economy focused conservatives tend to be disciples. Many of the conservatives I know who are familiar with Rand tend to be non-relgious. Conversely, It seems most run of the mill right wingers have never heard of her.

I'm surrounded by a lot of conservatives where I live and work and my experience with them has been that they are (for the most part) caring and charitable people...they just don't believe the gov't should be playing as large of a roll in it.