Iphone Lady Is An Amateur 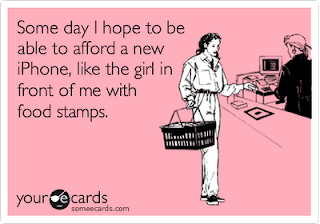 A number of my Conservative Christian friends have been posting this on Facebook lately.  A commonality amongst many of these folks is a frustration with the possibility that there are poor people who are getting something for nothing.... something they don't deserve.

This is an example of when the Conservative over-rides the Christian; which is something that has been happening in the Christian world for decades.  Let's forget for a moment that their frustration is based on presumption and outliers; let's pretend it is the norm.

Jesus recognized this personality flaw and our tendency toward hypocrisy, so he told a little story in hopes of getting a proper perspective to sink in:

Therefore, the kingdom of heaven is like a king who wanted to settle accounts with his servants.  As he began the settlement, a man who owed him ten thousand bags of gold was brought to him. Since he was not able to pay, the master ordered that he and his wife and his children and all that he had be sold to repay the debt.

At this the servant fell on his knees before him. ‘Be patient with me,’ he begged, ‘and I will pay back everything.’  The servant’s master took pity on him, canceled the debt and let him go.

But when that servant went out, he found one of his fellow servants who owed him a hundred silver coins. He grabbed him and began to choke him. ‘Pay back what you owe me!’ he demanded.

His fellow servant fell to his knees and begged him, ‘Be patient with me, and I will pay it back.’

But he refused. Instead, he went off and had the man thrown into prison until he could pay the debt.  When the other servants saw what had happened, they were outraged and went and told their master everything that had happened.

Then the master called the servant in. ‘You wicked servant,’ he said, ‘I canceled all that debt of yours because you begged me to. Shouldn't you have had mercy on your fellow servant just as I had on you?’ In anger his master handed him over to the jailers to be tortured, until he should pay back all he owed.

On a side-note, our fictitious Iphone owner is not doing anything illegal.  At worst, she is making use of a loophole that works in her favor.

Again, my Conservative Christian friends practically pop a blood vessel at the thought of this woman getting away with an Iphone, yet shrug as Romney makes off with millions using much more profitable loopholes.

I believe this is why Romney has been hiding his taxes.  He states again and again that he has done nothing illegal.  He probably hasn't, but those tax forms will likely show that he has used every loophole to milk the system; loopholes only available to the wealthy.  Compared to him, our fictitious Iphone woman is an amateur.  Yet, Conservative Christians defend Romney's behavior, while being outraged with hers.

But you have insulted the poor. Is it not the rich who are exploiting you? ~ James 2:6

It's a terrible irony in our economy that the poor among us are the most scrutinized social body. Our response to the need around can be tragically void of compassion.

We hated being on food stamps. At the time my wife and I ( we just had our first boy) were trying to finish school living in a horrible apartment all on a meager Walmart paycheck. We hated being on food stamps but we needed it for the short year we recieved them. Now my wife is going back to school (again) for her B.S. in Nursing and I'll be going back for a M.S. in computer science. We've got 3 kids, a house and two cars (one which is completely paid off), and none of that would have been possible without the government's help. Hopefully soon we'll be able to give something back to society. It was such a relief to be off of food stamps and be able to stand on our own.

The reality is that posession of a phone (not necessarily an i-phone, but you kno...) is essential for anyone who wants to improve their life and reduce their welfare dependency. How can that employer call you and offer you a job if you have no phone? Moreover, if you are a single mum and you are out doing stuff (like working, or buying groceries) how can the school call you if your kids are sick if you don't have a phone? Of course we didn't have them when we were young and poor, but then neither did anyone else.