Hal Was Told To Lie

Another great cartoon by David Hayward, aka The Nakedpastor!

Now when looking at this, a lot of Christians may react defensively. They may declare that God is a God of love. They may insist that they and their church don't present God or the gospel in that manner.

However, the vast majority of Christian churches believe that anyone who does not subscribe to some form of Christianity (and often, their version of Christianity) is going to be tortured in flames without mercy and without end. They may not put that in the church bulletin, but it is there.

I submit that believing that is REALLY bad for the psyche.

Subconsciously, realizing the unreasonableness, and because many Christians are truly people of good will, most churches put Hell on the back burner (yes, good pun there). But in doing so, Christianity becomes a contradictory, bait and switch, sales job. 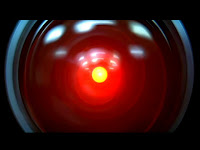 2010 is one of my favorite movies of all time. It is a sequel to the famous 2001, where the super computer Hal goes crazy and kills his crew. In 2010, we discover that Hal went haywire because he was given contradictory instructions.

"HAL was told to lie - by people who find it easy to lie. HAL doesn't know how."

I think a lot of the unhealthiness that exists presently in the Christian church is because of Hell theology. It is a very bad piece of programming instruction. A modern people has been told to declare and harbor a hateful idea - by medieval and ancient peoples who found it easy to harbor hateful ideas. We shouldn't know how.

I submit that believing that is REALLY bad for the psyche

Using my last few years to decide if its worth it to question and expose this comfortable lie, or just to walk away. I agree that it is psychologically damaging or at least mind numbingly stupid to profess.