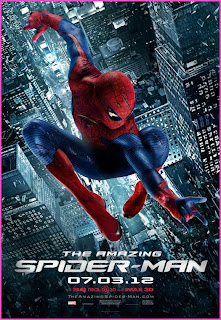 I wanted it to be Amazing, I really did.  Overall though, the best I can give it is a B.  Some spoilers may follow, so proceed at your own risk.

First the good -  Andrew Garfield is a great Peter Parker.  He makes the character likable and believable, even when the script fed him some unbelievable dialogue.

Along those same lines, Emma Stone was a wonderful Gwen Stacey.  They did not give her character a lot of depth, but she was charming and had good chemistry and interaction with Garfield.

The character of Spider-man was well done.  They captured the tone of the comics, particularly with some of the acrobatic and web slinging visuals.

The bad - Where to start?  By the time I finish this portion, I may feel the need to lower the movie to a C.

I think the primary thing that annoyed me in the movie was its inconsistency.  Going into a comic movie, the viewer is prepared to suspend their belief.  However, though the audience may give the movie makers grace to create new rules for their reality, the audience wants those rules adhered to once they have been established.  The rules were broken so many times throughout the movie, it became distracting.  There are too many to list, but here are some examples -

Martin Sheen and Sally Field simply did not work as Uncle Ben and Aunt May.  I think this was, in large part, the writer's fault.  Sheen's lines were simply goofy at times, and his "responsibility" speech was just corny and awkward.  Field did not create the bond that needs to exist between her and Peter... but again, I don't think the writers gave her much to work with.

In order for a comic movie to work, there must be an engaging bad guy.  You have to enjoy the bad guy as much as you do the title character... perhaps more.  The Lizard provided none of that.  He was flat, 2 dimensional, and entirely forgettable.

After watching the movie, one could not help but feel that there were a few key points in the story that the writer and director had worked out both visually and in terms of story... but they took no care in making those parts segue from one to the other.

Finally, there is a scene where a bunch of construction workers line up their cranes for Spidey to web through the city on, which was overly long and absurd.  Surely every one involved in the movie hated the end result... but because it cost so much to produce, it stayed.

All in all, it was good enough that I hope they pursue a sequel... but a new writer/director combo is a must.