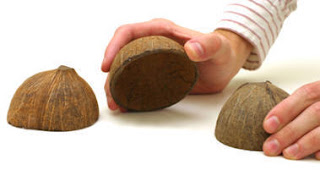 I spent the past hour catching up on some blog and Facebook comments I have been meaning to respond to this week.  The following is a response I gave to one friend who stated that not choosing to believe in God is a choice for Hell -  in other words, not choosing is not really an option.

I don't know if this ever happens to you, but sometimes I do not have a clear notion of how I feel about something until I write it.

"What would you think of someone who put out 100,000 shells and said,"One of them has a pea under it... choose the right one or I torture you."

Not choosing the correct shell does not make you immoral or deserving of anything bad... it makes the one setting up the choice an evil SOB.

But my point is not that a divine deity is an evil SOB... my point is that it is WE humans who have set up this shell game... as a control mechanism. That is not to say there are not honest souls who really are convinced that theirs is the right shell... and therefore have to warn everyone to select it. But picture yourself as an outsider, coming into a room where everyone is telling you to choose their shell... lest you die.

For myself, I have decided to leave the game... I leave the room of gambling over eternal destinies where the gods reflect the insecurities of their followers. I stand by Marcus Aurelius:

Funny, I just wrote about this same thing last night in my thought book: The "choice" is believe and be saved or don't believe and lose everything. I feel like it's very manipulative.

This is fantastic. I love the analogy.