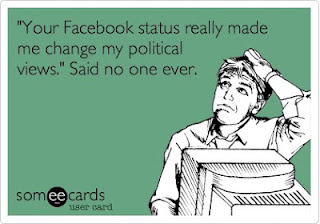 However, regardless of motive, I don't think the poster is all that accurate.  I think people's opinions on various issues are being changed all the time by what they read in social media outlets like Facebook.

Not the True Believer, of course.  No, those who see everyone on one side or the other are rarely affected by arguments that run contrary to their "truth".  But really, most people aren't like that.  Most people are a mish-mash of opinions and beliefs ... ebbing and flowing according to their circumstances, experiences, and education.  Having experienced changes of view in the past, they are more than aware they will have changes of view in the future.

That is what makes social media so amazing and effective - "You can't stop the signal."  Growing up, there were questions and doubts I had about various topics, but there was nowhere safe to vent these thoughts.  For all I knew, I was the only one having them.  But today, varied opinions and questions and answers are only a status or Google search away.  People find their voice when when they hear others speak of what burdens their heart too.  I think the growing acceptance of homosexual rights or the increasing population of atheists are examples of the influence of social media.

Contrary to the poster.... I think Facebook is changing people's views all the time.

Even a true believer may have their beliefs chipped away by seeing contrary opinions that make sense. Maybe after seeing 1000 contrary posts, they will just be a believer and not a true believers.