That Is Simply Not Right 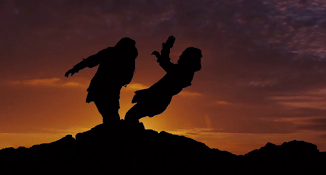 "If your very own brother, or your son or daughter, or the wife you love, or your closest friend secretly entices you, saying, “Let us go and worship other gods” do not yield to them or listen to them. Show them no pity. Do not spare them or shield them. You must certainly put them to death. Your hand must be the first in putting them to death, and then the hands of all the people. Stone them to death, because they tried to turn you away from the Lord your God."

This is the Word of the Lord, thanks be to God. It is the command from Jehovah who is the same yesterday, today, and forever. He is unchanging. This is the Holy Bible Deuteronomy 13.

Belief is a funny thing. If you quoted this verse to a typical right-wing Christian but switched out God for Allah and told them it was from the Koran they would have a much different reaction than if they knew from the start it was from the Old Testament. There are examples of this exercise on YouTube.

As bad as I think most right-wing Christians can behave while using the bible to justify their words and actions, I have never met one who would accept this verse at face value and carry it out. If pressed, they would start a song and dance about context and wiggle their way around it. However, I doubt they would allow a Muslim to have such wiggle room about similar scriptures in their Koran.

This is an example of Cognitive Dissonance - the state of having inconsistent thoughts, beliefs, or attitudes, especially as relating to behavioral decisions and attitude change. Any attempt to resolve the inconsistency results in distress. It is easy for anyone to slip into and only relentless self-reflection and a willingness to have one's ideas critiqued can keep it at bay.

I say this of right-wing Christians because most of mainline Christianity is comfortable saying the Bible is inspired... but not inerrant. To a lot of Christians, much of the bible is the human take on God. This is why in the Old Testament a believer could beat his slave to the point of death, whereas in the New Testament believers are commanded to treat their slaves well. If we had gotten to a part 3, slavery would have probably been forbidden.

But, as I said, even right-wing Christians don't go around killing folks who "try to turn them away from the Lord". Their conscience, which has matured beyond such brutality, knows that is simply not right.

It gives me hope that those same folks can start applying that conscience to other areas of the Bible and realize, "That is simply not right".