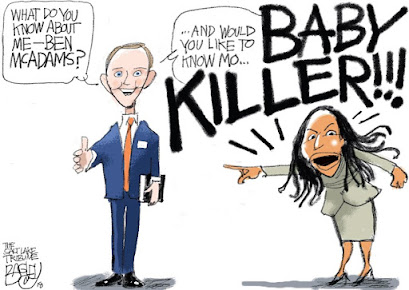 I have friends and relatives who come at the abortion debate the way Mia Love did against Representative Ben McAdams - throw around talk about "murdering babies" and the thinking is done.  This is one of the reasons why Trump can literally get away with anything.  For some, once a candidate has said "pro-life" nothing else matters.

They wonder why "baby killer" does not affect me more.  It is simple.  I know they are wrong.

They are focused on the optics of being pro-life.  To them, a lot of it is about the piety they get from the phrase... and the fact that it costs them nothing.

Recently, the Supreme Court upheld keeping some women from getting their birth control through their insurance.  Conservatives cheered this move.  They don't feel they should have to pay for women's "immorality".

This WILL cause abortion rates to go up.  If conservatives are against abortion, why support policies that increase it?  They are against it for the optics and piety part and in this scenario, those do not get touched.

Abortion threads its way into many issues - sex education, housing, wages, insurance, equal pay, child care.  How we handle these things as a society directly influences whether abortion rates go up or down.

Conservatives tend to be loudly opposed to abortion rights and yet consistently back positions on issues that will cause abortion rates to rise.

Liberals tend to be loudly in favor of abortion rights and yet consistently back positions on issues that will cause abortion rates to fall.

This topic always reminds me of a question Jesus posed - “But what do you think? A man had two sons, and he came to the first and said, ‘Son, go work today in the vineyard.’ And he answered, ‘I will not’; but afterward he regretted it and went. The man came to the second and said the same thing; and he answered, ‘I will, sir’; but he did not go. Which of the two did the will of his father?”

This is why I went to the "other side" after being "Pro-life" for a lifetime. I still have the same wish to reduce abortion, I just find that supporting women is more effective.