The Triggers Triggered Me 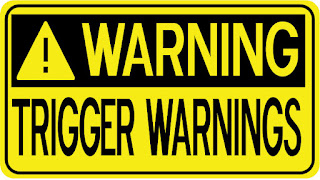 I am in a few on various topics.

This one was about having deconverted from Evangelicalism.

This group was highly into trigger warnings. Lots of posts were just listing the triggers... and then what the post actually was about was nested down in the comments... which usually had to be sifted through to find the original post.

Anyway, after having been scolded a 2nd time for not having the proper trigger warnings listed for what I wanted to talk about... I just decided I was too lazy and this was too much work. So I left.

Not one of those big dramatic leavings where you post about all the reasons you are leaving and give everyone a piece of your mind.

I just clicked the button.

I enjoyed hearing people's exit stories and I like talking about similar experiences in some of the crazy church life that we all lived through.

My goal has always been to make that stuff a memory. Something to talk about... that happened in the past. Get a good laugh and an eyeroll.

However, I started to notice that a lot of people like to keep this stuff present. If some believer isn't being overtly insensitive, they will contrive ways to imagine they were insensitive. Their identity is caught up in the trama that they experienced. They almost don't seem to want to make it their past.

Which is where some people are at... and you do what you need... but it isn't where I am at.

I am a walking trigger. I want to talk about everything and anything. And I am old now, so if I have to list all the topics I want to talk about before I talk about them and then scroll down and put my funny meme in the comments section... that is just too much for me to keep straight... so I am going to go talk somewhere else now.