Why Atheist and not Agnostic? 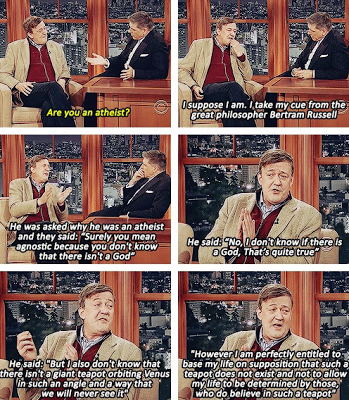 I am often asked why I don't consider myself an Agnostic rather than an Atheist.  The question was put to me again recently on Facebook, so I thought I would park my answer here for cutting and pasting purposes in future conversations. :)


I guess it depends on how one uses the terms.  In regards to myself, I use the term Atheist. For one thing, the  knowing/not knowing ideas are often presented as if they were equal, but opposite, sides of an issue. I don't think this is the case. It may be that there are invisible, undetectable gnomes living in my rockwall. The fact that I am always open to evidence showing me otherwise, does not change the reality that I do not believe there are any gnomes living there. Belief and non-belief on this issue are not equal opposites.Also, agnosticism offers religious folks safe harbor that I do not want to offer. During my short run with the term agnostic, I would often hear from religious folks "Whew! At least you are not an Atheist." Somehow, they interpret that term as playing for "their" team. Put two people of opposing religions in a room with an Atheist, and the religious folks will form a tentative truce. Remove the Atheist, and the opposing religions will go back to plotting the other's eternity in Hell. Atheism specifically sets me outside of that little game.

Yeah, saying, I am an atheist, makes things simpler. Everyone knows what the word means.

What most Christians don't know is that they are atheists too.

Ugh... another idiotic athiest who doesn't know that being agnostic isn't accepting other peoples religions but saying anything is possible and you are just as big of an idiot for believing in nothing as they are for believing in a man in the sky.
Agnostic A person who believes that nothing is known or can be known of the existence or nature of God or of anything beyond material phenomena...This means agnostics are open to ALL possibilities and don't limit our minds like Atheist's and religious nuts.

Chad,
Do you often find that calling someone an idiot in introductory conversations serves you well in explaining your view?