Putting God Back in Schools 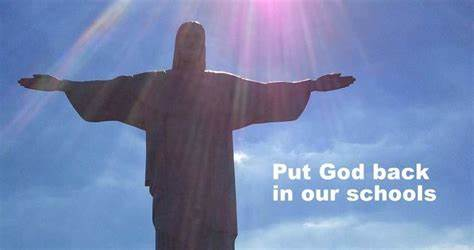 I read this letter in the Deseret News today (local Salt Lake Paper):

The National Rifle Association has proposed setting armed guards at all schools and supplying NRA volunteers to help. Concepts surrounding the arming and training of teachers have been suggested. Putting in safety glass and locking doors from the inside of schools has failed before.

Let's go all the way to the top and just put God back into our schools. We would have a fight in Congress, and many secularists would oppose an increase of God in a public place. Yet in courts of law and public monuments, the Ten Commandments are displayed.

If you cannot trust in a God who answers prayers of faith, what can you believe in? Congress?

My eyes were drawn to the author's "secularists" comment.  He is right, I would oppose it - but almost assuredly not for the reasons and motivations he has dreamed up for me in his head.

However, in reality, the "secularists" would never NEED to stop it.  The effort would implode long before any "secularist" had to step in.

The varied religions tend to only play nice together when they have a common enemy... witness how nicely many Mormons and Evangelicals did when they worked together to try to stop the anti-Christ from gaining a second term.  But it never lasts.

Imagine how Baptists would react to a Catholic prayer invoking Mary.  How well would most Christian faiths react to a Mormon prayer thanking God for his revelation to Joseph Smith?  Can we end our prayer with "Allahu Akbar"?  What about Eastern ancestral prayers?  The Hindu pantheon?  Oh, this is America - so Christian only?  So much for our Judeo-Christian foundation.  Then how bout' just no Jesus in the prayer? Watch the Evangelicals have a tantrum!

No, this would never make it as far as the "secularists".

To quote the Joker:

It is the end result of religion.  They tend to think much like the Immortals in Highlander - there can be only one.

Therefore YOUR religion has to go!

I would be inclined to just pull up a lounge chair, a bucket of popcorn, and watch the show - but unfortunately, these religions cause an awful lot of collateral damage with their theological game of King of the Hill.

It's an interesting idea, whose version of God to put back into the schools. My high school had a remarkably diverse population, for Salt Lake City. At four of the five graduations in my family (from 1979 to 1984), graduating seniors offered the prayers (opening and closing), and I know that not all of them were by the dominant religion. No one stood up to protest. No one walked out. No one objected to anything said in any of the prayers. Respectful civility happened. By the time my youngest sister graduated in 1988, prayers were no longer offered at Utah public high school graduations.

I think that it's skewed to judge what the majority of people think and how they would behave based on what is presented in the media. Extreme behavior sells, so it is what you get in the news. I don't think that most people would get their panties into a twist, unless only one religious view was allowed, but if everyone was given an equal chance (religious and non) to participate and provide education about their beliefs, imagine what it would do for tolerance in our society.

I don't disagree, but you are speaking of a narrow situation with older students setting the agenda. When people refer of getting god back into schools, they are usually referencing a somewhat romanticized version from pre-50s America where daily prayers were said and Bible scriptures were used within student curriculum.

I can only speak to conservative evangelicalism with any kind of experience, but I cannot imagine regular readings from Islmaic, Hindu, or Wiccan holy books going over very well.

Were any of those prayers at the HS graduation offered by a non-Christian religion? Even so, many folks are tolerant, as long as they are dominant. Start putting Christianity to every fourth or fifth prayer with the rest being non-Christian, and you would likely get some push back. Look at the level of push back being exhibited by much of Christianity over very small encroachment... and they are still vastly dominant.