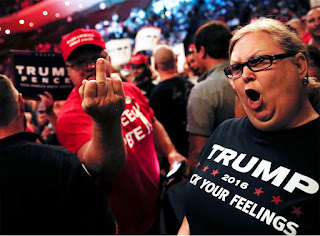 One of the primary catchphrases among Trumpers is "$^#@ your feelings!"  This turns out to be amusing.  As is often the case with their leader, this is projection.  "Feelings" is exactly why they follow Trump.

The reason they are in a tizzy right now is not due to losing, it is because they don't get how the process works. Normal occurrences get translated into a conspiracy. Similarly, they often can't really articulate much about Trump's policy agenda, his foreign strategy, his economic plan.  Yet, they will consider him one of the best presidents we ever had.

If they don't understand politics or history, why would they consider him a great president?  What is their metric?

He hits them right in the feels.  Unlike previous conservative presidents, he will say what irks them.  This is why they wave flags, wear hats, and scream at democrats in ways they never did for Bush or Reagan.

They have a white grievance button that Trump pushes with glee.  He sees that they want to dominate the religious landscape, so he strokes their ego.  He has a short fuse and worries that people don't respect him - they completely relate.

Down the line, he satisfies every feeling that has had no outlet over the decades.  So, like Trump, they project onto others the very motivations and actions they are steeped in.

Every drive they have for Trump is founded on feelings.  Which is why they tell you to $^#@ yours.

You are exactly right! They’re dealing with another kind of feeling now: denial.